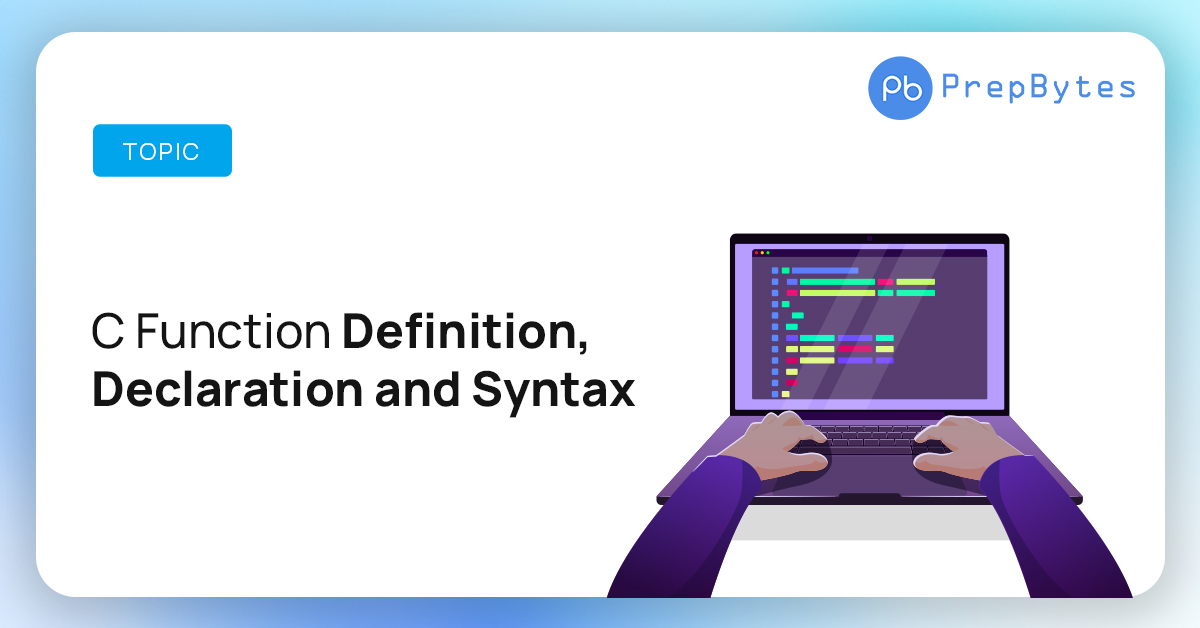 A function in C language is a collection of statements or we can say sentences that work together to complete a goal. The main() function is a must for any C program, even the simplest programs can declare extra functions.
Your code can be broken up into several functions. It is up to you how to split your code into several functions, but logically each function should carry out a certain task.

The name, return type, and parameters of a function in C language are disclosed to the compiler in the function declaration in C. The actual function body is provided by a function definition in C language.
Your program can call a variety of built-in functions from the C standard library. For example, strcat() joins two strings together, memcpy() copies data from one memory region to another, and many other methods.
In addition to these names, a function in C language may also be referred to as a method, subroutine, process, etc.

Use of the Function in C language

A C program’s code may easily be split up into numerous distinct functions. It is entirely up to us how we split the given code into the many possible functions. However, the split must be systematically done so that each function can perform and can function is able to do a certain task.
The function declaration in C provides the compiler with information about the function’s name, arguments, and return type. To put it another way, the function definition in C assists in giving us the real body of any function we need in a program or piece of code.

Functions are also known as subroutines, methods, and procedures in computer programs. Users of the C standard library have access to a number of built-in functions that they can utilize in the relevant programs. For combining two strings, we may use the strcat() method. We can also use the memcpy() function to copy data from one location in memory to another.

The following is the general format for a function definition in C programming language:

Example
The max function’s source code is provided below (). The largest value between the two arguments, num1 and num2, is returned by this function−

A function declaration in C provides information to the compiler on the name and method of calling a function. The function’s actual body can be specified independently.

A function declaration has the following parts −

For the above-defined function max(), the function declaration is as follows −

Only their type is necessary when defining a function; hence, the following declaration is likewise acceptable:

Types of Functions in C language

The types of functions in C language has functions that are of the following types:

Call by Value is the default method for sending arguments in C programming. In general, it implies that we are unable to modify the parameters used to call a function using the code that is already present there.

In C programming, no function may ever return the value of another function. We can utilize the void in the form of a return type if we don’t need to return the value that is provided in any function. Let’s examine a C function example that doesn’t execute the return of a value from the accessible function.

Let us look at an example of a C function that has no return value:

Example of a C function with the int return value,

The data type in the example above is int, and the value we are attempting to return is 20. If we want to utilize a floating point value as our return value (for instance, 64.5, 7,9, 27,61, etc.), we must use the float as the method’s return type.

Here, we have to call a function so that we get the function’s value.

The following benefits are provided to us by the functions of the C programming language: