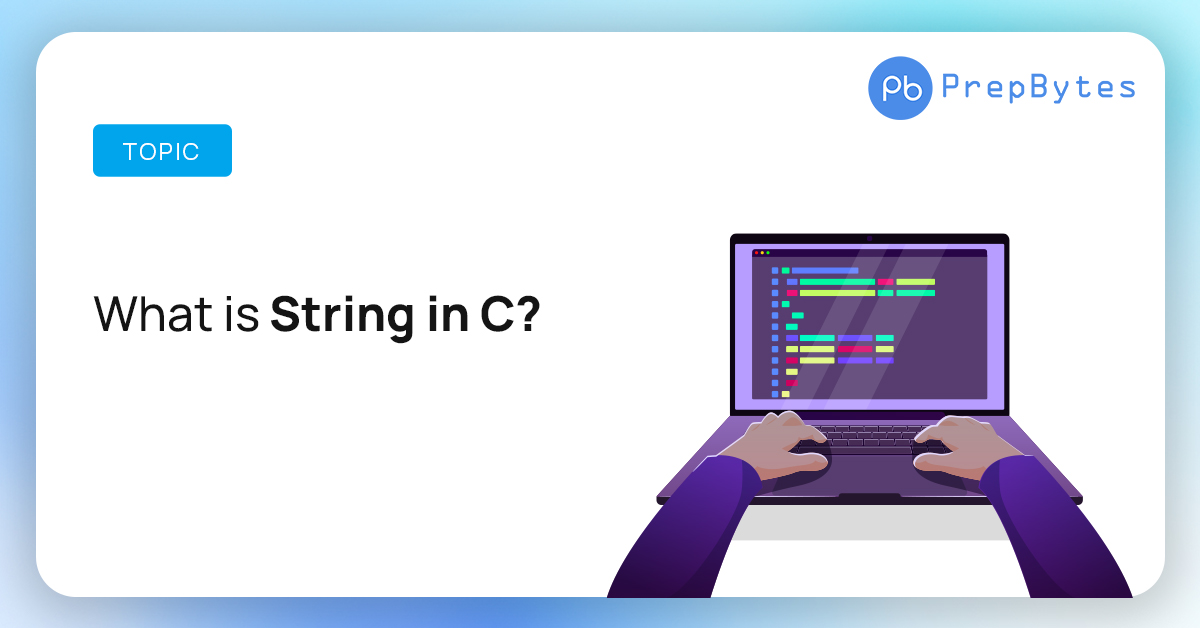 The definition of C string , how to declare a string, string definition in C and what is string in C language are all covered in this article. With examples, it goes over the many ways to initialize strings. It discusses how to read text from a user and how to read text with whitespace. Also addressed is how to represent strings as pointers and send them to functions. It covers what we learned in the article by going over an example of a C String. Finally, it compares and contrasts character arrays and string literals.

Strings are useful for communicating information from the program to the program user and, thus, are a part of all programming languages and applications. They are implemented with character arrays that behave like usual arrays with which we can perform regular operations, including modification. Another way of implementing strings is through pointers since character arrays act as pointers. These pointers point to string literals and cannot be modified as string literals are stored in the read-only memory by most compilers. Thus, any attempt at modifying them leads to undefined behavior.

Like many other programming languages, C encloses strings in double quotes ("") while enclosing characters in single quotes (”). A null character (\0) is automatically added at the conclusion when the compiler discovers a string of characters contained in double quotation marks.

So, the string is stored in this way:

A group of zero or more multibyte characters surrounded in double quotes, such as "abc," is referred to as a string literal. String literals cannot be changed (and are placed in read-only memory). Any attempt to change their values leads to behavior that is undefined.

How to Declare String in C

Consequently, the traditional declaration can be expressed as follows::

We must always take into consideration the extra space that the null letter (\0) occupies.

Highlights
In C, strings are declared using character arrays.
Their general syntax is as follows:

There are four methods of initializing a string in C:

Although this string should be 10 characters long, we kept the size at 11 to include the Null character. The Null character (\0) is automatically added at the end by the compiler.

Note: If the string is too long for the array, it only accepts characters based on available space. For instance:

The important thing to keep in mind is that because this string is an array and is called "str," it functions as a pointer.

3. Assigning character by character with size
A string can also be assigned character per character. But it’s crucial to set the final character to be ‘0’. For instance: 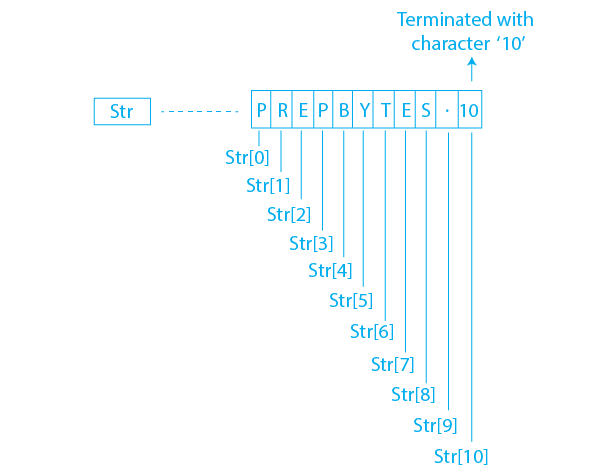 Once they have been declared, character arrays cannot be given a string literal using the ‘=’ operator.

Since assignment operations are not supported after strings are declared, this will result in a compilation error. We can utilize the following two techniques to overcome this:

Note – Making sure the value assigned has a length that is less than or equal to the character array’s maximum size.

Read String from the User

Scanf(), the most popular method for reading strings, reads a string of characters until it runs into whitespace (i.e., space, newline, tab, etc.). The process of accepting input with whitespace is described in the section that follows. For instance,

If we enter the following input:

We obtain the following Output:

As we can see, once it detects whitespace, scanf() stops accepting input.

How to Read a Line of Text?

As it automatically stops reading when it encounters whitespace, the scanf() operation cannot read strings that contain spaces. By combining fgets() with puts(), we can read and print strings with whitespace:

name_of_string: It is the variable that will hold the string.

Using both functions as an example:

The strength of fgets() and puts() is shown in the above example, where we can see that the entire string, including the whitespace, was stored and printed.

Strings can be passed to functions in the same way that we give an array to a function, whether as an array or as a pointer, since they are just character arrays. Let’s examine this using the following program:

As we can see, both of them yield the same Output.
Highlights: Functions may accept a string as a character array or even as a pointer.

As we’ve seen, character arrays that function as pointers are used in C to represent strings. As a result, we can manipulate or even perform operations on the string using pointers. 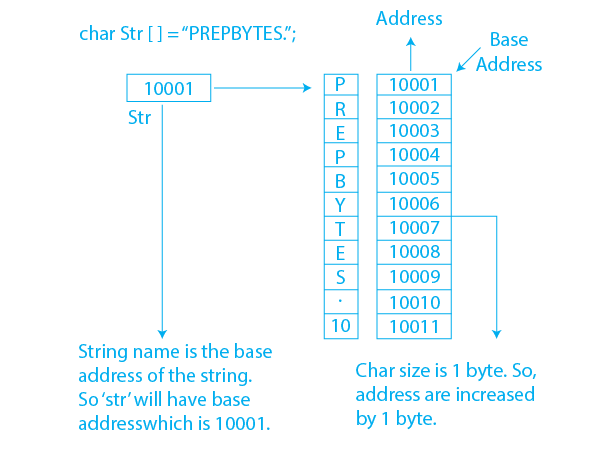 This program illustrates everything we learnt in this article, so check it out:

Let’s review string literals before moving on to the distinction. A group of zero or more multibyte characters surrounded in double quotes, such as "xyz," constitutes a string literal. String literals cannot be changed (and are placed in read-only memory). They behave in an ill-defined manner when you try to change their values.

Arrays can be initialized using string literals. This has been demonstrated numerous times in the article. Let’s examine the differences now using the examples below:

1. char str[] = "PREPBYTES.";
With this command, a character array that has a string literal attached to it is created. It operates like a typical array and allows for modification and other common operations. The only thing to keep in mind is that even though we only initialized 11 members, the size of the array is actually 12, since the compiler added the \0 at the end.

Note – It is defined to declare string literals as constants when printing them, such as:

This avoids the warning that appears when printf() is used with string literals.