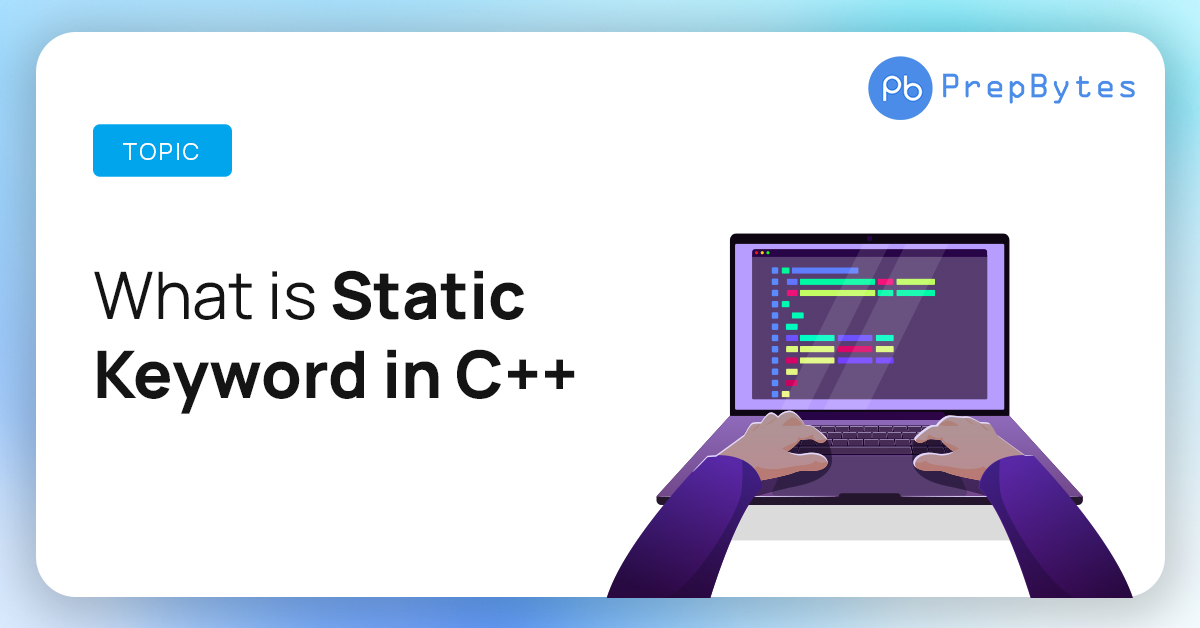 In this article, we will be discussing static keyword in C++. The use of static keyword in C++ is not limited to just the scope of variables as in C language where they are used to bypass the restriction of usage in their own scope making another ways possible. In static keyword C++ uses includes static members of a class such as objects and functions within the class.

Static Keyword has its use in C as well as its successor C++ with slightly new features to it in the Object-oriented programming language. In C, the use of static keyword is limited to declaring or initializing variables which is not the case with use of static keyword in C++ as we will discuss further in this article what more they offer in C++.

Usage of static keyword C++ in general is performed for a static variable as the moment it is declared, space is allocated to the variable for its lifetime and multiple calls to the function don’t make reassignment of the variable as it carried throughout the lifetime of the program.

The usage can be performed in the function while the presence of variable can be independent of life of the function as it can be used even after the function has completed its set of instructions after being called.

The following snippet of code denotes one of essential use of static keyword in C++ as the function was called consecutively for five times but no value was passed despite that the ctr variable was not reinitialized to value of 0 instead kept on incrementing the very first moment it was set up and allocated the space.

The only difference between use of static keyword in C++ in function and class is that while using them in class, the context changes from functions to objects where a static variable declared inside a class can be used between various objects once initialized without reinitializing while during creation of new objects.

It sets up the variable as default in the class they are being used in. However, to avoid them being reinitialized and cause error, they cannot be passed to constructors on creation of object using static keyword in C++.

In the above example, the att and att2, both objects are initialized with both of them having value of I set up as 12 earlier. The value will remain constant across objects with its use throughout the use of static keyword in C++ class.

It expresses the use of static keyword in Object Oriented Programming to increase the transparency of objects or class function wherein the life of objects is equated to program and function can be called without the dependency of an actual object.

In a manner similar to declaration of static variable, class objects can also be declared as static where they tend to exist in the program till it remains in the state of execution.

Taking an example, it might be easier for you to understand on how state members actually work as constructor and destructors show ambiguous behavior when the object is set up as static which will be active till the lifetime of its parent program.

In the above program we get the answer where Hello world i.e the text inside our main body is printed after the execution of constructor and destructor when control returns back to the main function. However this can be tweaked to print the Hello World text first and the text inside the destructor at the end by of use of static keyword in C++’s object declaration.

The destructor was executed after the program was terminated. Therefore, stating that class objects are static in nature. Hence static keyword C++ is used to bar delay the destructor until the end of the program.

This brings us to the end of Static Keyword in C++. Hope you have a better understanding of the topic now. You can check out more articles on PrepBytes.

1. What is the use of static keywords in C++?
Ans. Modification of variables cannot be done after placing static before a variable or an object. Static keyword C++ is useful in case we want to allocate the memory for the lifetime of the program.

2. What are the differences between local and static variables?

4. What is the lifetime of a static variable?
Ans. Static Variable’s lifetime remains permanent and they continue to exist in the program. They are stored in static memory.

OOPS Concepts in C++ with Examples

C++ Program to Reverse a Number

What is Member Function in C++?

Access Specifiers In C++ – A Quick glimpse to private, public, and protected

3 Ways To Convert Binary To Decimal In C++