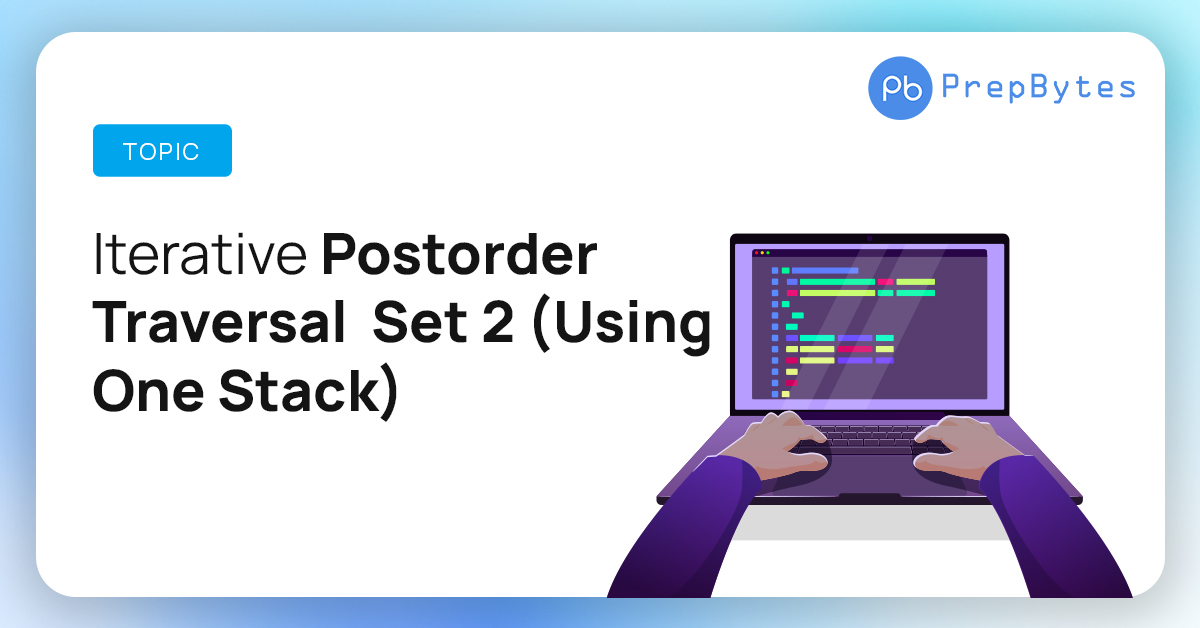 You are given a binary tree. Your task is to print the postorder traversal of the binary tree using just 1 stack. 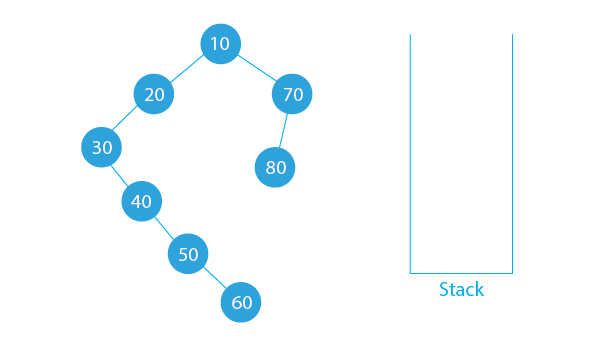 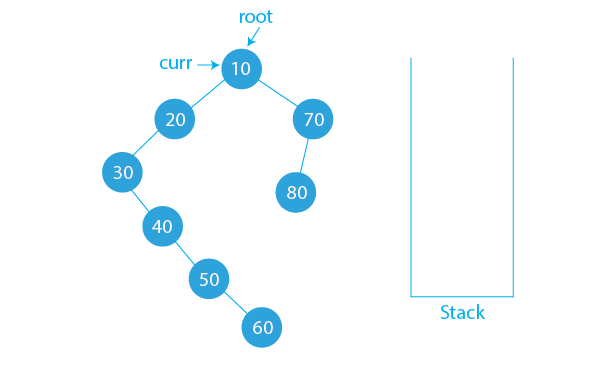 So, let us now discuss the approach.

What is Postorder Traversal?

Before we directly jump into the solution, let us first discuss in detail, what postorder traversal is. Consider the tree given below. 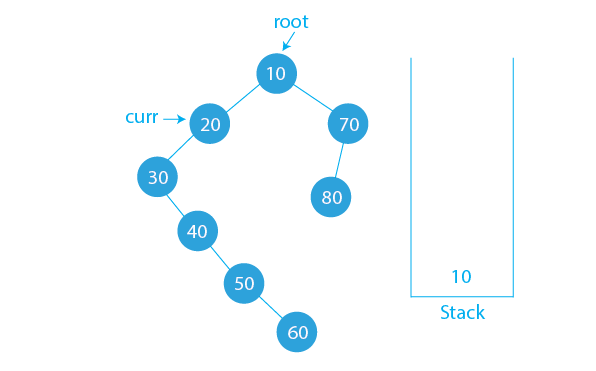 We are currently at the root node of the tree. There are three different types of traversals. The preorder traversal says that we have to follow the order “root left right”. This means that as soon as we are at a node, we have to mark it visited. 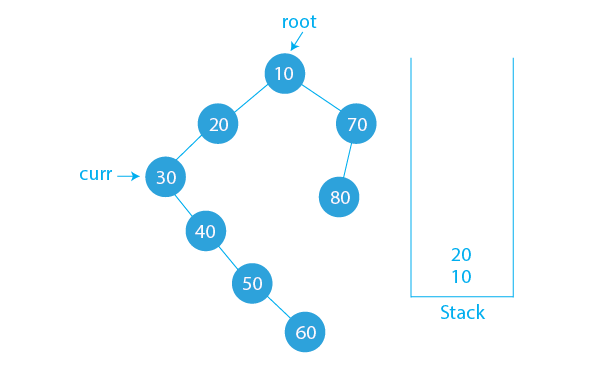 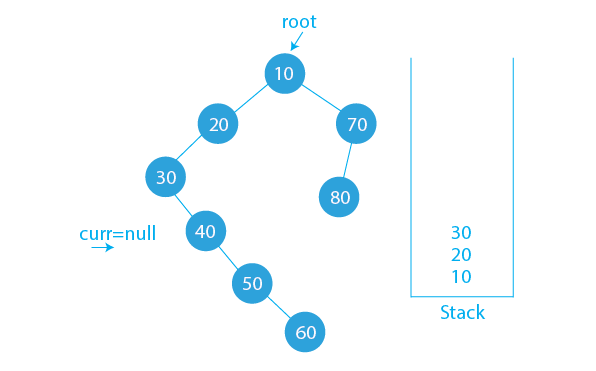 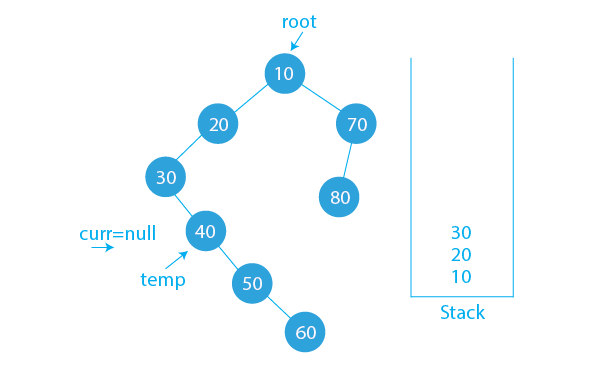 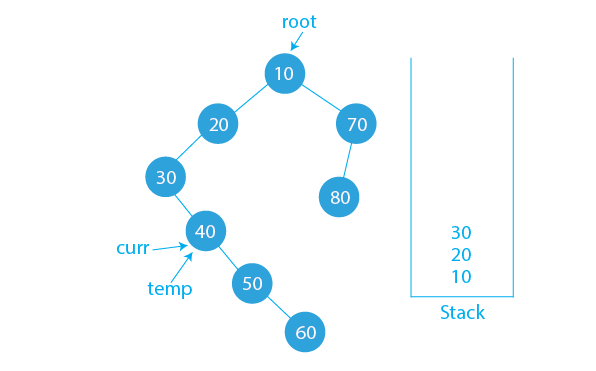 The inorder traversal has the order of “left root right”. This means that first we explore the left subtree, then mark the current node as visited, and then visit the right subtree. This is shown below. 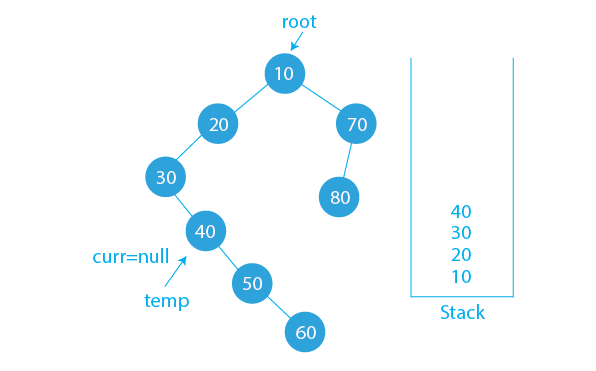 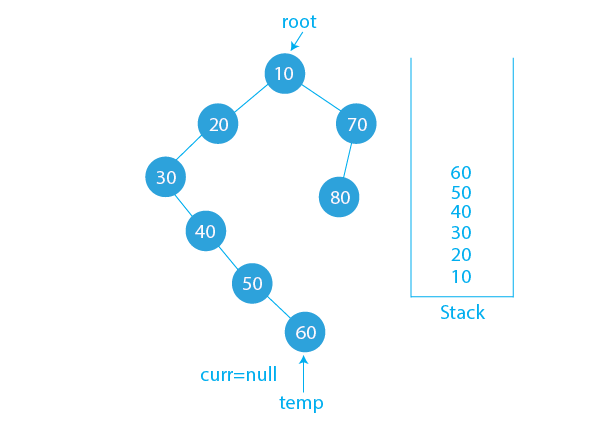 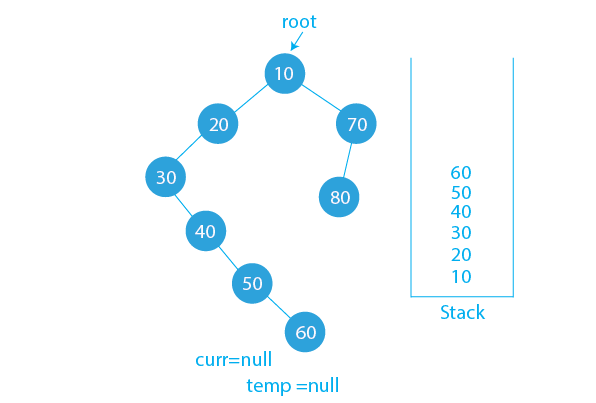 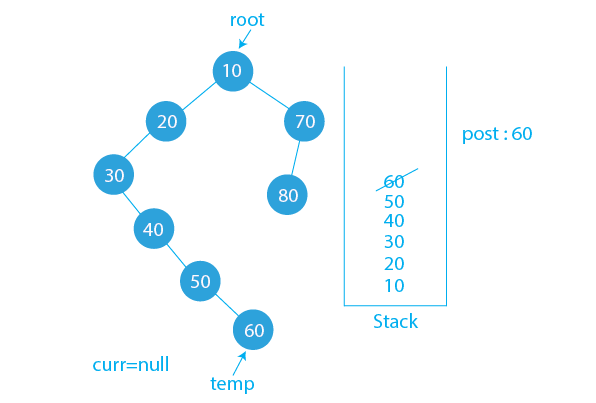 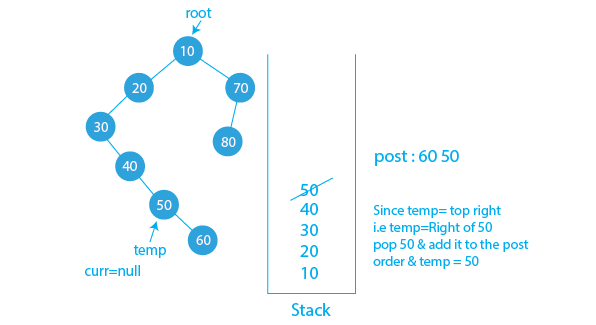 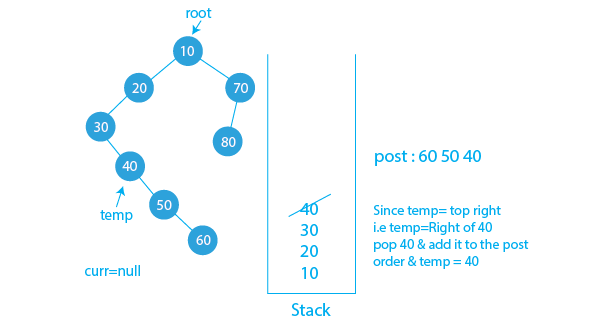 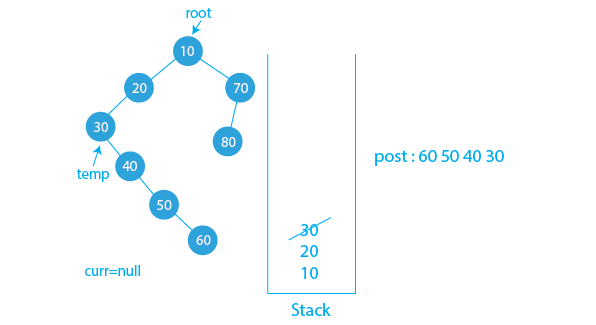 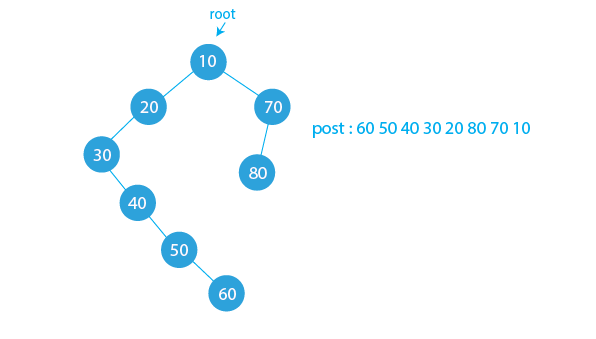 So, for a better understanding, have a look at the image shown below.

Now that we have a complete understanding of different tree traversals, let us approach our problem i.e. postorder traversal using 2 stacks.

Let us see what the algorithm is.

So, this algorithm helps maintain the postorder i.e. “left-right root”. Let us see an example dry run for the above algorithm.

Consider the following tree shown below.

So, we will start by having the variable curr (current) at the root of the tree.

So, according to the first step of the algorithm, since current is not equal to null, we add it to the stack and move it to its left.

We keep on repeating this step as shown below.

Since a temp is not equal to null, current will now move to temp.

Since the current is now not null, we add it to the stack and move to its left child.

So, we see that again, the steps will be repeated. This means that every time, we try to go to the left child of every node and if the left is null, we move to its right. This will keep happening till we reach Node 60.

Since temp = null, we pop a value from the stack and it becomes temp and we also add it to the postorder.

Now, while the stack is not empty AND temp is equal to the right child of the top of the stack, we have to keep popping from the stack and adding the node to the post order.

So, 50 was popped and added to the postorder. Now, we will pop 40 since the right child of 40 is equal to temp.

This will continue as shown below.

Now the right child of the top of the stack is null but temp = 30 (Node 30 not value). So, again, we see that curr = null and we follow the above-discussed steps.
You can complete the rest of the traversal yourself and you will find that we end up having the postorder of the tree correctly.

So, now that we have understood the procedure, let us write the code for the same.

Time Complexity: The time complexity of this procedure is O(N) as we have to push and pop elements from the stack and the maximum height of the stack can be O(N).

Space Complexity: The space complexity of this procedure is O(N) as we are using a Stack to perform our operation.

We tried to discuss Iterative Postorder Traversal. We hope this article gives you a better understanding of Iterative Postorder Traversal, PrepBytes also provides a good collection of Foundation Courses that can help you enhance your coding skills. Want to make sure you ace the interview in one go? Join our Placement Program that will help you get prepared and land your dream job at MNC’s. Mentors of Prepbytes are highly experienced and can provide you with basic, in-depth subject knowledge for better understanding.

How can a call to an overloaded function be Ambiguous

Identify and mark unmatched parenthesis in an expression

Expression contains redundant bracket or not

Reversing the First K Elements of a Queue

Count natural numbers whose all permutation are greater than that number