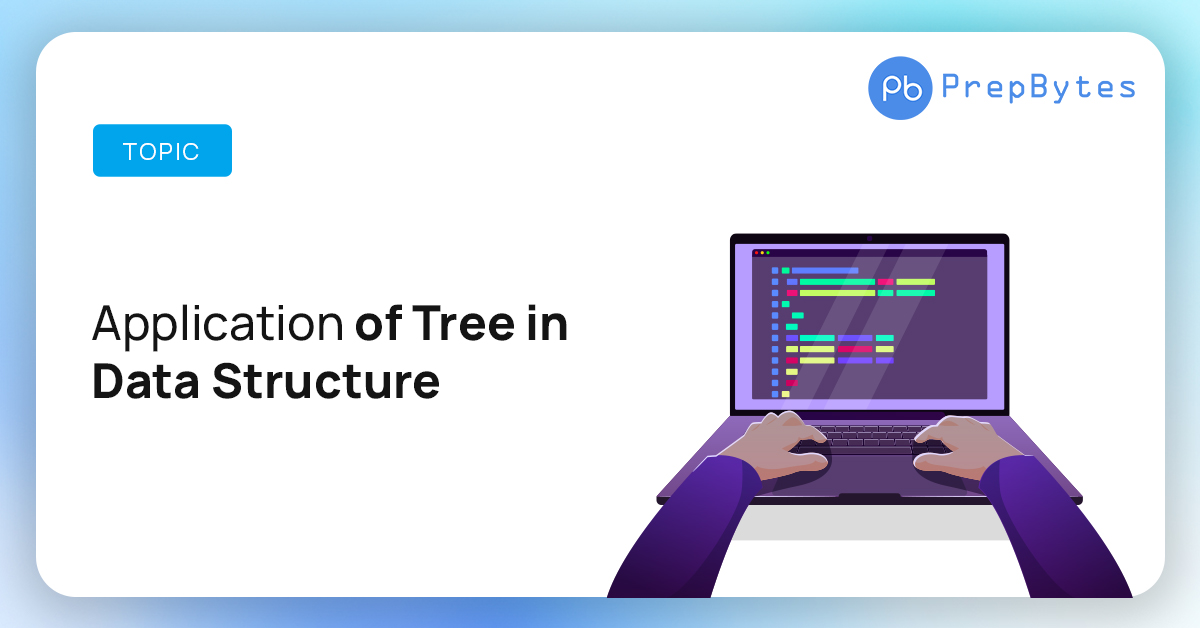 In this article, we are going to study the application of tree in data structure. We will also dig into the working of hierarchical data structure, the trees and how it works to give us applications.

In further sections of the article, it will be apparent to us how the data structure comes in handy for a wide range of applications of tree in data structure.

What is Tree in Data Structure

A tree is a hierarchical data structure that is non-linear such that there are multiple paths that can be travelled, unlike a single path that exists in arrays or linked lists.

It consists of objects consisting of data and the address of the interconnected nodes. The number of addressed depends on the nodes as it can be from 0 upto n where binary tree has at max 2 address while a generic tree can have more than 2 addresses stored.

Root Node
The initial node at the top of tree goes by the name root node. It must not be confused with parent node as the ancestor of any node in general can be called as parent node. There is only one root node in a tree.

Sibling Nodes
The nodes that have the same parent or ancestor (immediate predecessor) are known as sibling nodes.

Leaf Node
A node that does not have any children is known as leaf node.

Edge
Any two nodes are connected to each other with the help of an edge. It is also known as link.

Path
A sequence from a nodes connected through edges is known as path.

Depth of Node
The length of path from the root to the respective node is the Depth of Node.

File System
Tree is prevalent used in file system of computer where thre and multiple files and folder to locate a data and access it. The folder structure can be broken down to understand in the form of an hierarchical tree data structure

Searching for Key
Speacial type of tree known as Binary Search Tree or BST can be used to find key comparatively faster than other data structures like Array or Linked List.

Finding Minimum Cost
Spanning trees are used to find the path in a tree with minimum cost such that all the nodes are covered.

Storage of elements
Unlike arrays, trees do not have an upper bound for the number of elements like linked list as it stores the address to nodes are stored in heap that are allocated dynamically.

XML/HTML Data
Data used in the website that is composed in the hierarchical form is a general application of tree in data structure that has a usage in website architecture.

Priority Queue
Priority queue data structure is implemented with the help of heap, a specialized form of tree used to extract the highest priority element that is found at the root of the tree.

Indexing in Databases
B Tree and B+ Tree, a advanced form of tree are used to implement indexing in databases.

Usage in Compiler Design
Syntax Trees are used during designing a compiler to make operations like evaluation of arithmetic expression, scanning, parsing and generation of code.

Decision-Making and Analysis
Decision Trees are used in machine learning for decision analysis and studying the data.

Web Search Engines
Trie is used for search patterns where a node is letter and its children are indexed as the next letter in the sequence. Compressed form of trie known as suffix trie is used for web search engine. It can also be used to perform a full-text search.

We hope you liked this article on Application of Tree in Data Structure and hope to see you again with another piece of insightful article from PrepBytes.

1. What is a binary tree?
A tree that has each node having two or lesser childrens. Node with no children is known as leaf node.

3. What is level in a tree and how do we determine it?
The root node is the the level 0 and as the path goes deeper, the level increments by 1. We use breadth first search to determine the level of a node.