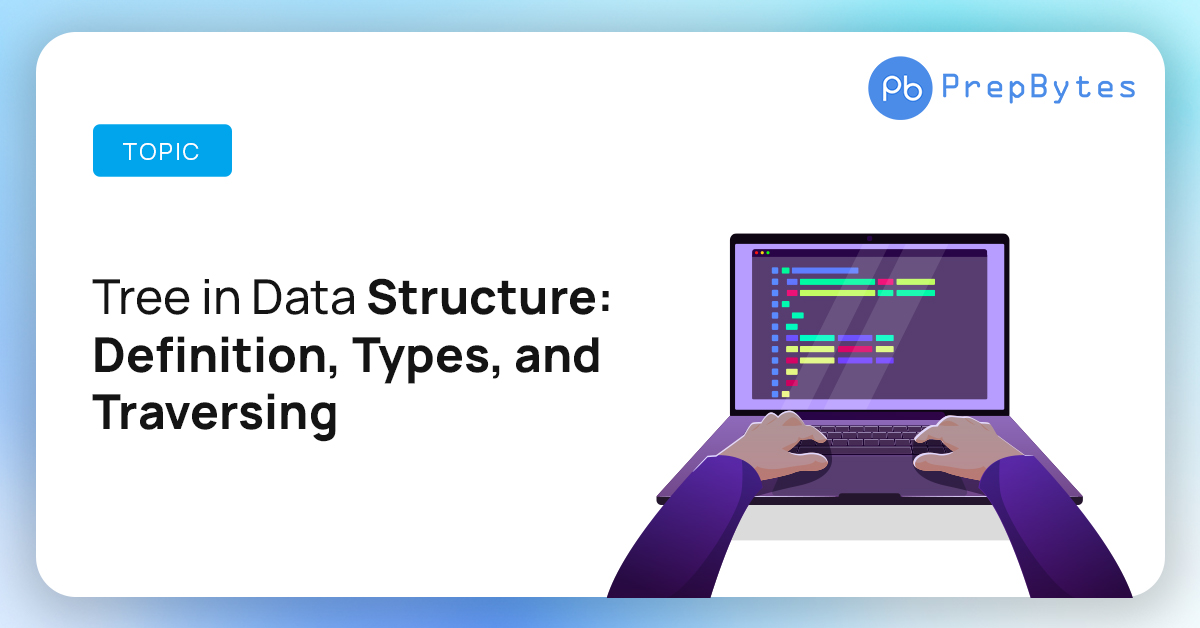 A Tree definition in data structure is a tree is a hierarchical data structure. It consists of multiple nodes that contain the actual data. The node that is at the top of the hierarchy is called the root node of a tree as shown below.

The node from which the next level nodes emerge is called the parent of those nodes and the nodes that emerge from the node on the previous level are called its children or child nodes.

A node in a tree might have 0 or more children. The nodes that do not have any children are called leaf nodes.

The leaf nodes are not necessarily the nodes on the last level. They are just nodes with 0 children. This is shown below.

A tree data structure is a hierarchical data structure used to fasten up the searching process because the N data nodes are not arranged linearly but rather in some different manner. The time taken to search for a value in the tree is said to be of the order of the height of the tree. Since the maximum height of a tree can be O(N), the worst-case complexity of searching remains the same in a tree i.e. O(N).

However, if it is linear, what’s the point of making a tree? That is exactly what we want to convey that trees are mostly non-linear only.

Let us now discuss different types of trees in detail.

Types of Trees in Data Structure

We can have different types of trees in data structure. Some main types are as follows.

The node structure of a generic tree contains a list of child nodes for the current node as the number of children for any node is not fixed.

A generic tree is also called an N-ary tree. Let us now understand the next types of trees in data structure.

A generic tree Node is shown below.

A binary tree is a tree in which a node can have a maximum of 2 children. So, the child nodes are named left and right children respectively. This is shown below.

So, the node structure of a binary tree will contain 2 node pointers viz, the left child and the right child.

The node structure for a binary tree is shown below.

There are different methods by which we can traverse trees. Although the methods remain the same for any tree, we are going to discuss the methods using a binary tree in this discussion. So, let’s get started.

Right now, we are at the tree’s root node. According to the preorder traversal, we must follow the "root left right" sequence. This implies that we must label a node as visited as soon as we arrive at it.

The order of the inorder traversal is "left root right." This indicates that we traverse the left subtree first completely, traverse the right subtree next, and then mark the present node as visited. This is seen below.

Since we kept going to the left node, we have not recorded any nodes as visited along the way. No left node is present for node 4 at this time. We can therefore state that we have travelled through its left node. Now that the order is "left node right," we must mark the node visited after visiting the left node. As a result, node 4 is marked as visited.

The postorder traversal now follows the "left right root" order. This indicates that we must first completely tour the left subtree, then completely traverse the right subtree, and last, we must mark the node visited.

We have not yet visited any nodes because we continued going to the left node of each node as we moved forward. We can now observe that Node 4 has no left node. We can therefore claim to have visited the left node. There is no right node either. We can therefore claim to have also visited the right node. We may now mark the currently visited node. In the postorder traversal, Node 4 is the first node.

We now return to node 5. Here, we can see that we’ve been to the left subtree of the node 5. Node 5 has no right child. We can therefore claim to have visited both of the children. We should therefore also include 5 in the postorder traversal.

So, for a better understanding, have a look at the image shown below.

So, the program for preorder, postorder, and inorder traversals of a binary tree is shown below.

Conclusion
So, we have seen the definition, types of trees, and traversals of trees in this article. We hope that you liked the discussion and understood the concepts well. We hope to see you again soon at PrepBytes.

Let us now look at some Frequently Asked Questions (FAQs)