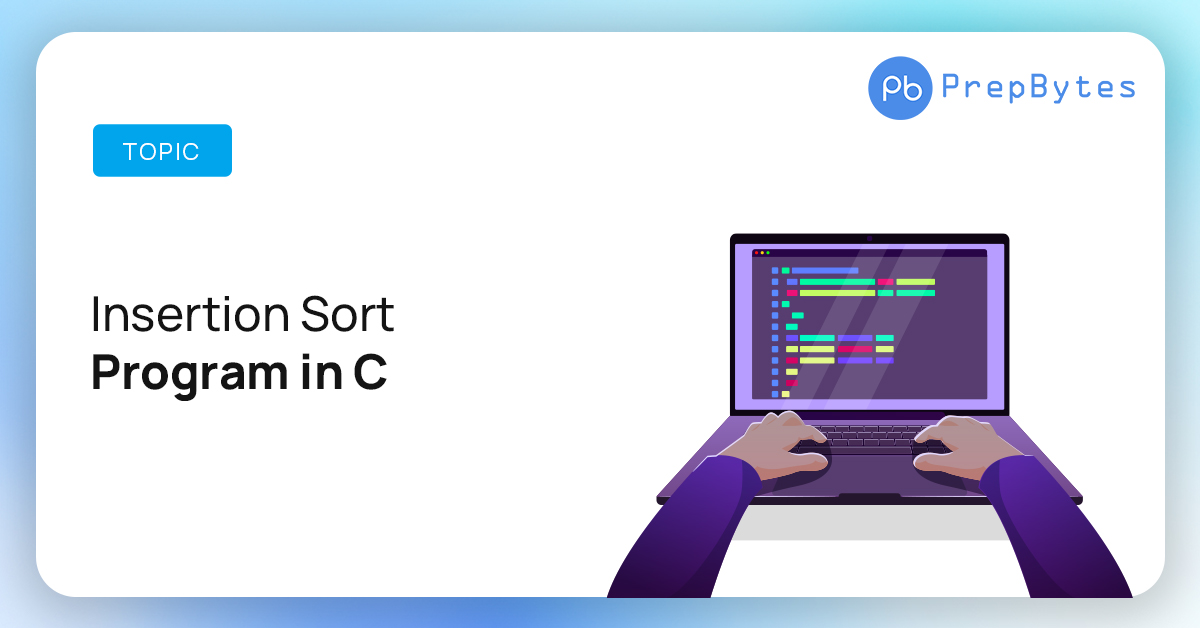 In this article, we are going to learn how to code one of the most asked sorting algorithms, Insertion Sort in C Language. Starting with the intuition and approach for the problem before coding up the Insertion Sort Program in C. We will also be analyzing the complexity of the program for best and worst cases.

It is a stable and in-place sorting algorithm often used when comparison operations have a greater cost. Stable sort denotes that it maintains the ordering of elements while sorting and makes comparisons to position elements thereby requiring no extra space making it an in-place sorting algorithm. It is effective for small or partially sorted arrays in front of other advanced algorithms making it useful in terms of stability and simplicity.

In insertion sort, we move one by one to the left of the array and on each iteration, we move right for the placement of elements in their correct position in any element that is not following the order. The process is kept repetitive until our outer loop reaches the last accessible index.

Now that we have clarity of the concept and working of the Insertion Sort program in C, let us take an example array and dry run with illustrations to understand the working in a step by step manner:-

Suppose we have an array [ 6,2,1,3,5 ], the insertion sort algorithm considers the first element is already sorted. There are going to be n-1 passes to sort the array in ascending order.

The Selection Sort program in C to sort the array in ascending order can be implemented in a few easy steps as mentioned below:-

We just discussed the algorithm to implement and now let us look at the code and study how we can do an insertion sort program in C.

The best case time complexity of insertion sort is O(N) under the condition that the array is already sorted while the worst case reaches up to O(N^2) and on deducing the average case, it goes on to be O(N^2) as well.

The space complexity of insertion sort remains O(1) as no extra auxiliary space is consumed on sorting the array.

It often comes into use to perform certain tasks, few examples where the algorithm is used are-

Conclusion
In this article, we learnt what insertion sort is and under what conditions it is a better option. Later, we moved towards understanding insertion sort with a dry run on an example array.

1. Which among them is better – Insertion Sort vs Bubble Sort?
Although both of them share the worst-case complexity of O(N^2). But insertion sort tends to be a better performer in terms of the number of operations performed to sort.

2. How is binary search effective when used together with insertion sort?
Binary Search can be used to find the exact location to insert an element on the sorted array.

3. Discuss the condition for the best and worst case time complexity of insertion sort?
Best Case Time Complexity of Insertion Sort is O(N) when the array is already sorted while the worst-case complexity jumps to O(N^2) in the worst scenario when an array is sorted but in reverse order.