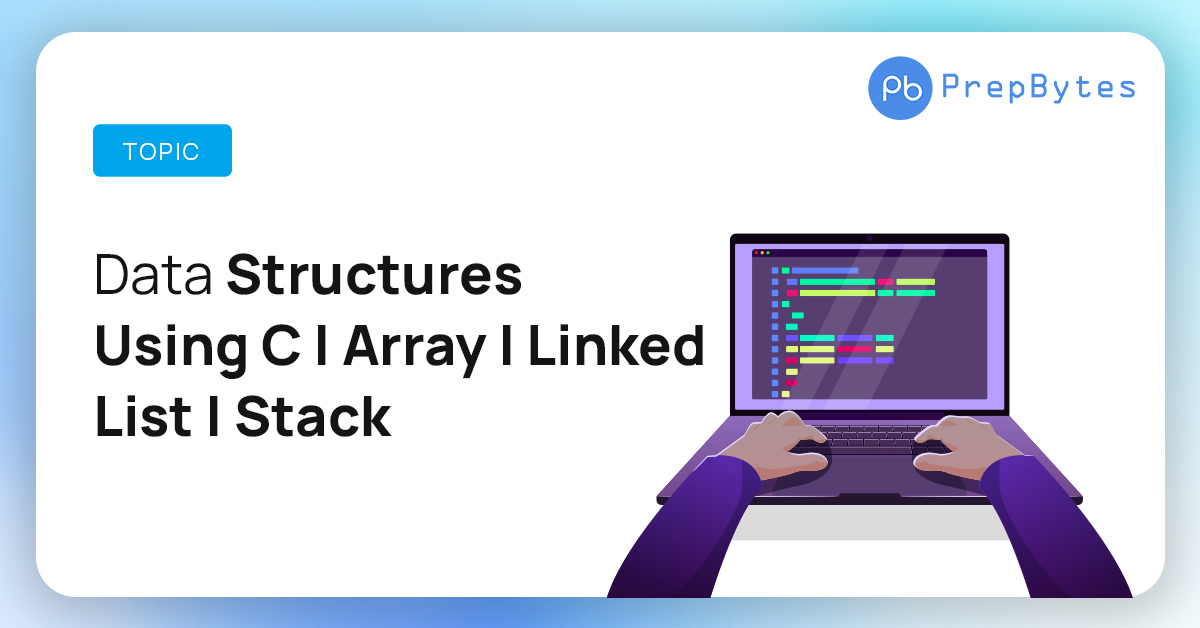 What are Data structures using C?

Data structure is a storage that is used to store and organize data. It is a way of arranging data on a computer so that it can be accessed and updated efficiently.
Depending on your requirement and project, it is important to choose the right data structure for your project. For example, if you want to store data sequentially in the memory, then you can go for the Array data structure.

Data Structures using C is an important part of Programming. Get a better understanding of problems by watching these video tutorials created by expert mentors at Prepbytes.

Why are Data Structures important?

Data structure provides a way of organizing, managing, and storing data efficiently. With the help of data structure, the data items can be traversed easily. Data structure provides efficiency, reusability and abstraction. It plays an important role in enhancing the performance of a program because the main function of the program is to store and retrieve the user’s data as fast as possible.
As applications are becoming more complex and the amount of data is increasing day by day, which may cause problems with processing speed, searching data, handling multiple requests etc.

Let’s learn about each type in detail.

Arrays are defined as the collection of similar types of data items stored at contiguous memory locations. It is one of the simplest data structures where each data element can be randomly accessed by using its index number.
In C programming, they are the derived data types that can store the primitive type of data such as int, char, double, float, etc. For example, if we want to store the marks of a student in 6 subjects, then we don’t need to define a different variable for the marks in different subjects. Instead, we can define an array that can store the marks in each subject at the contiguous memory locations.

Representation of an array

We can represent an array in various ways in different programming languages. As an illustration, let’s see the declaration of array in C language –

As per the above illustration, there are some of the following important points –

Linked list can be represented as the connection of nodes in which each node points to the next node of the list. The representation of the linked list is shown below –

A Stack is a linear data structure that follows the LIFO (Last-In-First-Out) principle. Stack has one end, whereas the Queue has two ends (front and rear). It contains only one pointer top pointer pointing to the topmost element of the stack. Whenever an element is added in the stack, it is added on the top of the stack, and the element can be deleted only from the stack. In other words, a stack can be defined as a container in which insertion and deletion can be done from the one end known as the top of the stack.

Stack works on the LIFO pattern. As we can observe in the below figure there are five memory blocks in the stack; therefore, the size of the stack is 5.
Suppose we want to store the elements in a stack and let’s assume that stack is empty. We have taken the stack of size 5 as shown below in which we are pushing the elements one by one until the stack becomes full.

Since our stack is full as the size of the stack is 5. In the above cases, we can observe that it goes from the top to the bottom when we were entering the new element in the stack. The stack gets filled up from the bottom to the top.
When we perform the delete operation on the stack, there is only one way for entry and exit as the other end is closed. It follows the LIFO pattern, which means that the value entered first will be removed last. In the above case, the value 5 is entered first, so it will be removed only after the deletion of all the other elements.

The following are some common operations implemented on the stack:

We tried to discuss Data Structures using C in this article. We hope this article gives you a better understanding of basics in Data Structures using C. Prepbytes also provides a good collection of Foundation Courses that can help you enhance your coding skills. Want to make sure you ace the interview in one go? Join our Placement Program that will help you get prepared and land your dream job at MNCs. Mentors of Prepbytes are highly experienced and can provide you with basic, in-depth subject knowledge for better understanding.

Why Data Structures and Algorithms are so important for interviews ?