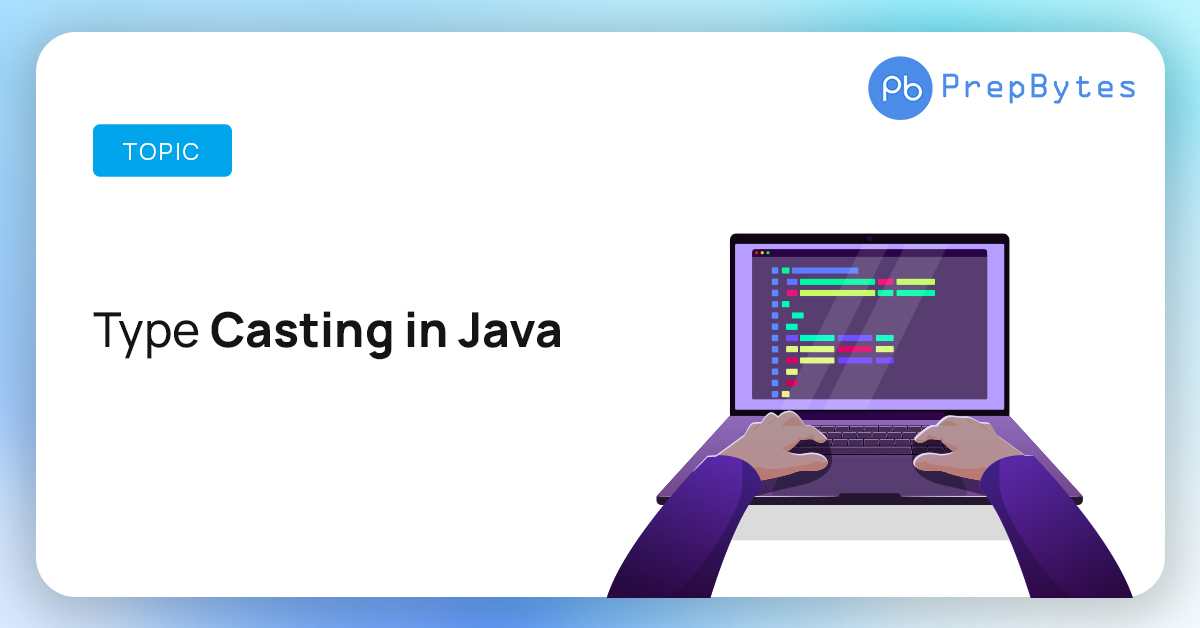 Introduction to Type Casting in Java

The varied aspects of the Java programming language is effectively handled by a wide variety of data types. Unfortunately, we have to convert one data type into another one more frequently. The concept of Type Casting is used in this situation.

Java has a feature called type casting that allows the form or type of a variable or object to be cast into a different kind of object. The process of converting one data type to another is known as type casting. Let’s first discuss Java data types before moving on to typecasting.

Java is a statically-typed language which means that all the variables must be declared before using them. So, It is compulsory to declare the variable’s type, and also the names must be specified.
Data Types in Java are broadly divided into two major categories:

Char:
It is used to store Characters in Java.

Int:
Integer data is a 32-bit Data Type used to store numbers. It is the default data type used for storing numbers until there is a big number that might overflow.

Short:
Short Data Type is half the size of the int Data Type. In java, it is of 16- bit.

Long:
It is used for storing 64-bit data in memory.

Float:
A single-precision 32-bit IEEE 754 floating point is the float data type. It has an infinite value range. The default setting is 0.0F.

Types of Typecasting in Java

Widening Typecasting is the process of converting a lower data type to a higher data type. This style of casting is also referred to as automated typecasting because Java automatically accomplishes it without any explicit code writing.

Two data types need to be compatible with one another to execute this conversion. In widening type casting, 19 different types of primitive conversion are possible:

Explanation: In the above example, we have defined a class Parent and a subclass Children which extends the Parent Class. Then we performed upcasting implicitly while defining the objects. Here the parent class is typecasted to the parent Class.

Narrowing typecasting is the process of converting higher data types to lower data types. It is also known as explicit typecasting since Java does not perform it automatically; rather, the programmer must do it manually.

In narrowing type casting in java, there are 22 different primitive conversion types possible:

When two classes hold the relationship of parent class and child class through inheritance, narrowing typecasting, which is similar to widening typecasting, can transform an object of one class into an object of another class. Inheriting classes are referred to as parent classes or superclasses, whereas classes that get inheritance are referred to as children classes or subclasses.

A parent class reference object is given to the child class during upcasting. Although it is not possible to give a parent class reference object to a child class in Java, if downcasting is used, there won’t be any compile-time errors. When we try to run the program, it throws “ClassCastException”. So Unlike narrowcasting requires the programmer to expressly use a cast operator.

Explanation: In the above example, we have defined a class Parent and a subclass Children which extends the Parent Class. If we perform downcasting implicitly, it will throw compile time error. Then we performed downcasting explicitly.