In this question, we are given a linked list. This linked list was sorted and then rotated by X elements. We have to find the value of X.

Let us first discuss what counting rotations in a sorted and rotated list means.

Now, let's remove the last two elements and add them to the front of the list, we will get:

That’s it. That is the question. In this explanation, we have rotated the sorted list by 2 elements. In the question, we are given a rotated list. We have to return the number of elements by which it was rotated.

Explanation: We can see that if we add the first two elements to the end of the linked list, it becomes sorted. Hence, 2 rotations is the answer.

Let’s take one more example, say if the given list is:

Now we can see that if in the sorted list we move the last 3 elements and add them to the front, we will get:

which is the same as the list which was given to us in the input.

From this, we can say that the linked list, which was given to us in the input, was initially rotated by 3 elements. So our output will be 3.

Now, I think the problem statement is clear from the above examples. No try to think how you can approach this problem before moving to the approach in the next section?

We are going to use a linked list traversal and compare the elements. Let us look at this simple yet efficient approach.

Firstly, we have to notice that the values are not sorted now. Now, what caused this distortion?

A few of the elements from the end of the sorted linked list were added to the start of the list. We can get a hint here.

We will keep comparing adjacent elements:

We will have to keep a counter variable which will be incremented till it doesn’t reach the break condition. Let us have a look at the algorithm. 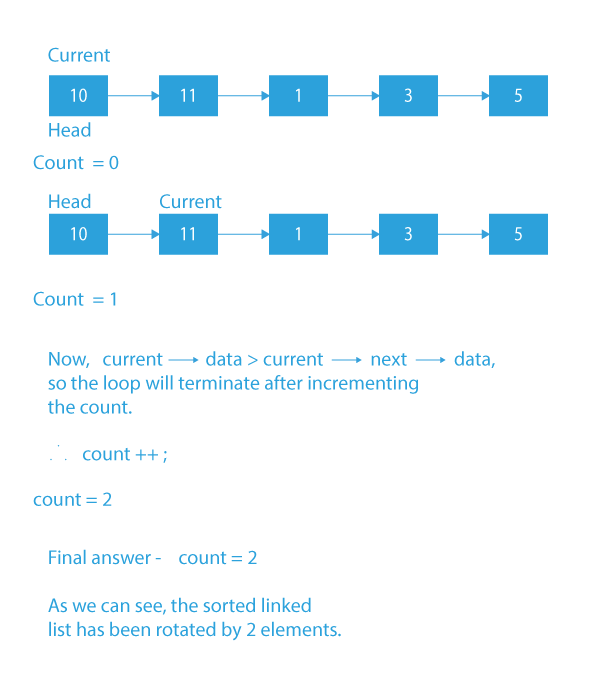 So, in this article, we have tried to explain the most efficient approach to count rotations in a sorted and rotated linked list. This is a simple question, but we have to prevent overflows while traversing through the linked list. It uses many of our basic concepts, and that is what makes this question quite an important one for coding interviews. If you want to solve more questions on Linked List, which are curated by our expert mentors at PrepBytes, you can follow this link Linked List.