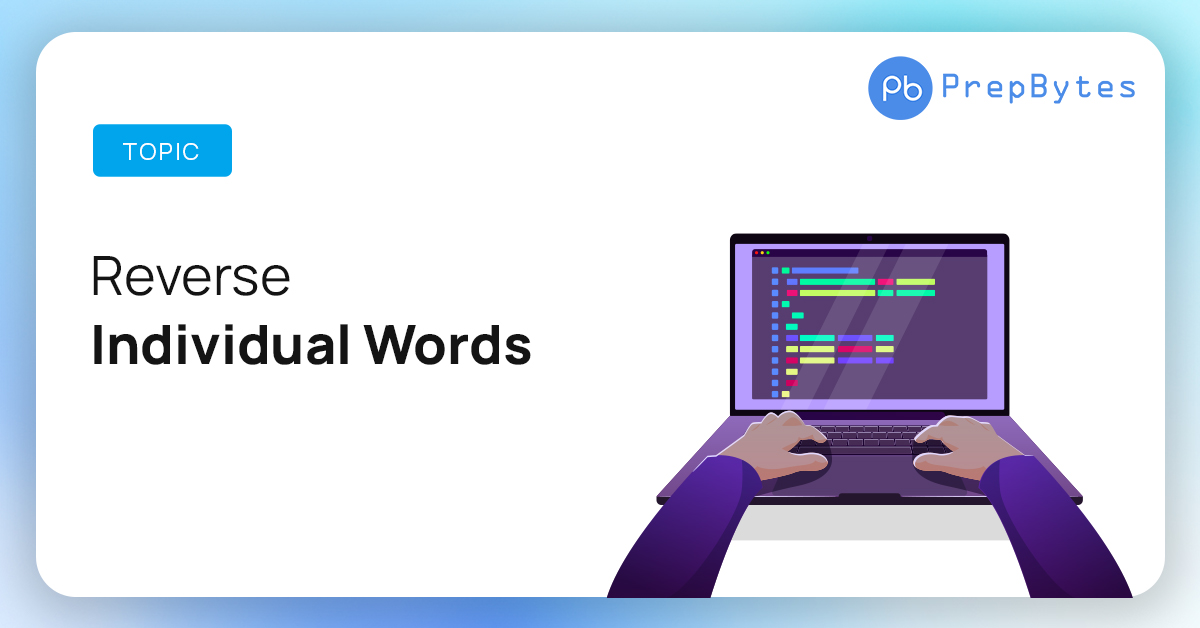 You are given a string. This string contains many words that are space separated. You have to reverse each word in the string individually.

The input string is “Hello and Welcome to PrepBytes”.
So, the output for this string should be “olleH dna emocleW ot setyBperP”.

Let us take another example. Say the input string is “Hello”. So, the output for this is “olleH”. Since there is only one word, we reverse it. Please note that there is no space after the last word in both the outputs.

The input string will only have 1 whitespace between the words. Also, for the output, you have to maintain the same.
It is recommended not to use any predefined functions for reversing the strings to solve the problem.

The primary approach is to get all the words in an ArrayList or vector of strings. Then, we can reverse each word and print them space-separated. This is shown below.

As space is encountered, we insert the temporary string in our vector/ArrayList. So, the same will happen for the next word as shown below.

Now, the last word will not encounter a string. So, when the pointer reaches index = size of the input string, we will insert the last string into the vector/ArrayList.

Now that we have all the words with us, we reverse each word and add them with a space into the output string.
When we insert the last word, we will not insert space after it.

Now, we only need to learn to reverse a string. So, let us discuss it.

Consider the word shown below

We have taken 2 pointers, low and high. The pointer low is at the index 0 and the pointer high is at the last index of the word.

We will swap the characters at low and high and increment the low pointer and decrement the high pointer till low is less than high. This will reverse the word as shown below. 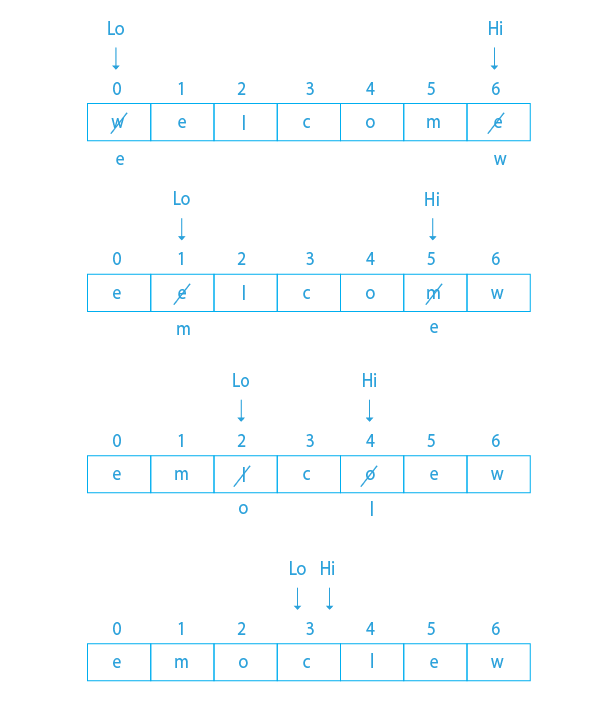 If there are N words with an average length of L, then the time complexity of this approach is O(N * L). This is because we are traversing every word in the string to reverse it.

The space complexity is also O(N * L) as we are maintaining an array of N words to reverse the words.

We cannot improve the time complexity in this case because we will have to traverse all the words in order to reverse them. However, we can improve the space complexity. Let us discuss the approach.

So, let us consider a stack of characters and a pointer on the first index of the input string as shown below. 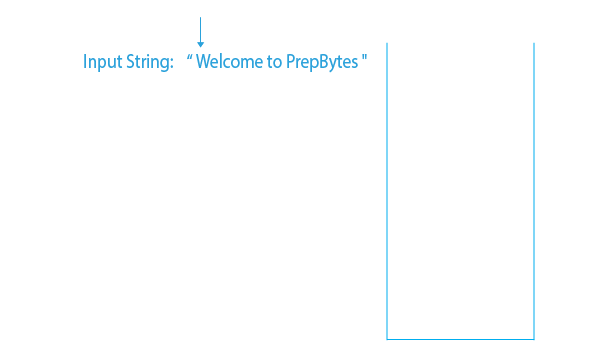 So, we have to insert the characters in the Stack the pointer on the input string encounters a space. 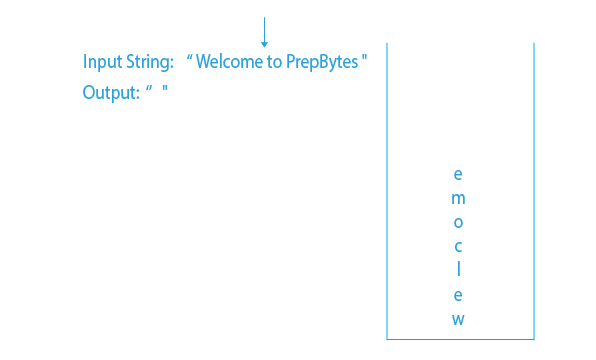 Now that the pointer has encountered a space, we pop each character from the stack and insert it into the output string. This will insert the reversed word into the string. 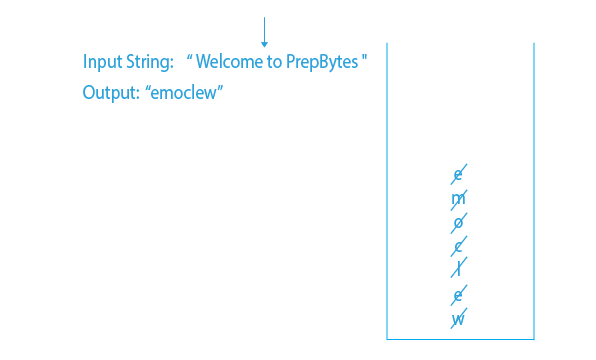 Before moving to the next word, add a space to the output string as well. Repeat the procedure again for the next word. 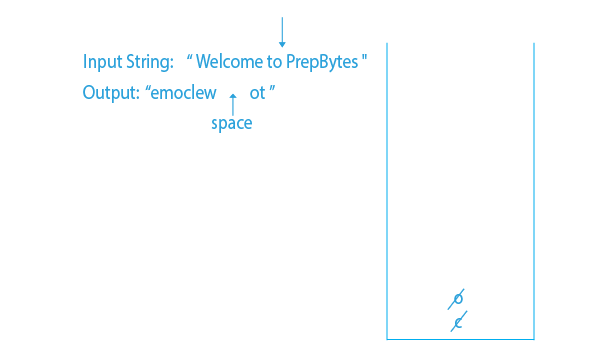 Now, for the last word, when the pointer reaches the end of the input string, we have to pop each character from the Stack and add it to the output string. 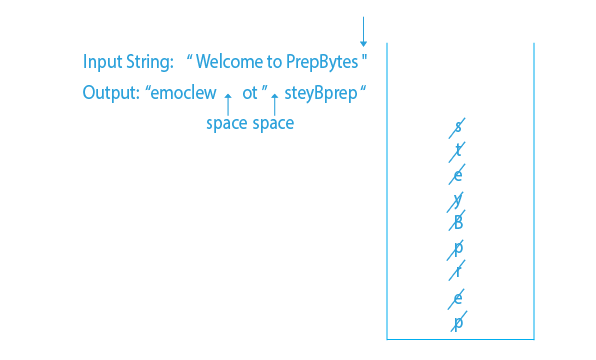 So, now that we have understood the procedure, let us write the code for the same.

The time complexity will be the same i.e. O(N * L) as we are traversing all the words in order to reverse them.

The space complexity of this approach is O(L). This is because only one word is inserted at a time in the Stack.
Follow up on this approach

Can you reverse all the words with the same time and space complexity without the use of Stack? Think about it !!

The answer is Yes. Instead of using a stack to insert a word in it, you can simply reverse the string as we did in the first approach by taking an auxiliary string (or what we called a temporary string in the previous approach). Since we take an auxiliary string, the space complexity will be O(L).

In the case of the Java Program, we will take an auxiliary StringBuilder in place of a string.

So, the solution is pretty simple. We have 2 pointers both kept at the index 0 of the input string, initially.

Now, we move the high pointer till it encounters a space as shown below.

So, now we can keep a pointer i at low and j at high – 1. Then, we can reverse the word by swapping the ith and jth characters till i is less than j. 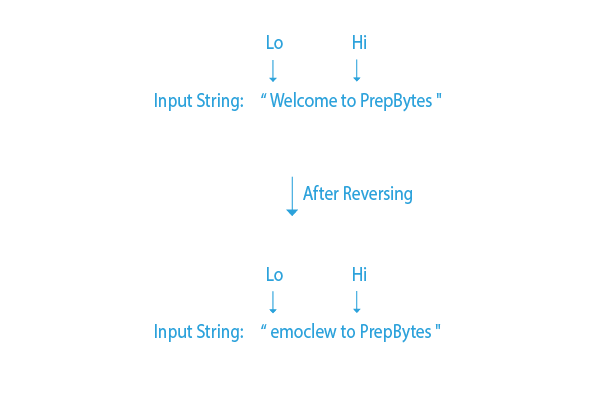 Now, we will keep on repeating the same procedure till low and high are less than the length of the string.

So, in this approach, we are not using any auxiliary String or Stack. Hence, the auxiliary space is constant i.e. Space complexity is constant.

However, this approach will work for C++ but not in Java. Why? Let us discuss the same.

Why won’t the above approach work in Java?

We are given a String in the input. Since the Strings in Java are immutable, we cannot set or change any character of a String in Java. (It is not allowed and such functionality is not present in Java). So, if we have to reverse, we will have to take a StringBuilder and if we take a StringBuilder, then we have taken an auxiliary space of size O(L). Hence, it will be the previous approach and not the current one.

So, this solution is not possible in Java.

The time complexity is O(N * L) since we are traversing all the N words of average length L.

The space complexity is constant i.e. O(1) as we have not used any extra space in this approach.

However, solving the problem using some predefined methods is not allowed as per the constraints of the question. Hence, these 3 approaches are sufficient.

This article tried to discuss How to Reverse Individual Words. Hope this blog helps you understand and solve the problem. To practice more problems you can check out MYCODE | Competitive Programming at Prepbytes.