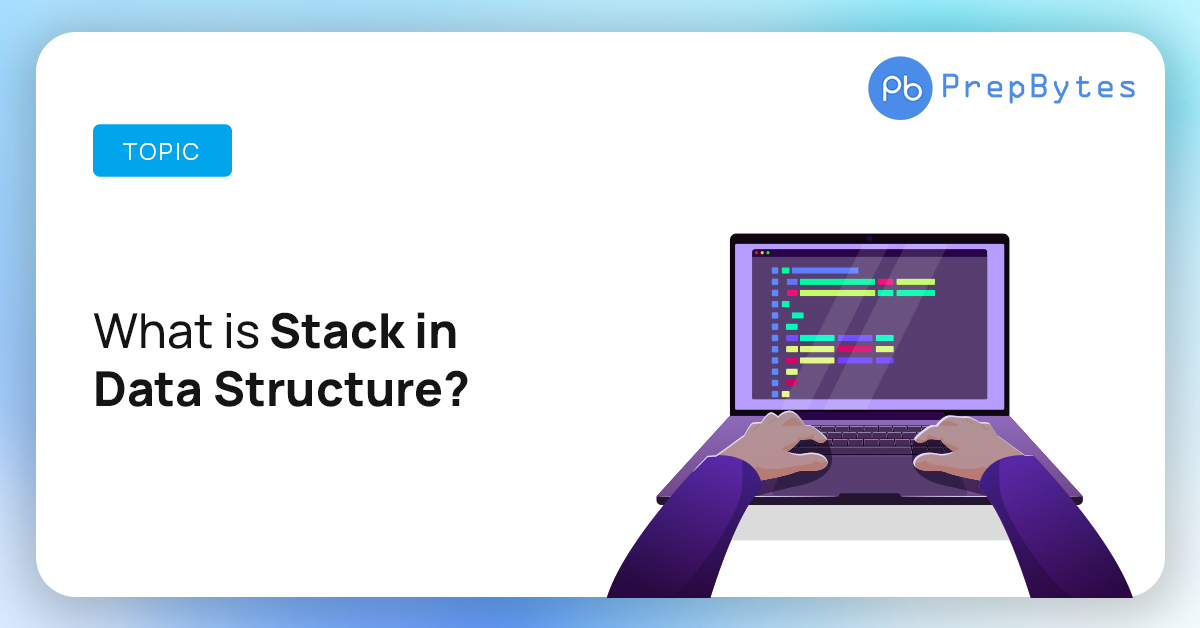 Before moving onto what is stack in data structure, let us take a stack example in real-life that will help us solidify concepts of stack for further sections of this article. We can define a stack in data structure as a bunch of books lying above one another, what resembles to be a clear stack example as such we will remove one book from the top and keep on doing so, until we have not found our required book.

Note that we cannot pick any book out from the middle as it would violate the stack definition and property of Last In First Out or LIFO, which states that the first element to be removed must be the last or top element.

Stack is a sequential data structure where elements are inserted and removed from a single end, following the property of LIFO and a set of stack operations are performed such as push and pop in stack. Stack is an abstract data type that has its behavior and functions defined by a set of rules and operations defined by the user.

Stack implementation can be performed in two of the following manners that are as follow:-

The representation of a stack using an array is straightforward where an array has a size N. N-1 can be seen as the top of the stack.

1. Push:- It appends an element onto the top of the stack and increments the value of top by one. If the stack array is already full, it results in stack overflow error.

2. Pop:- It removes an element lying at the top of the stack and decrements the value of pop by one. If there is no element in the stack, stack underflow error follows.

3. isEmpty:- It returns a boolean value if the stack is empty or not.

4. isFull:- It returns a boolean value if the stack is completely filled or not.

5. Top:- Also known as stack peek in stack, it returns the value at the top of the stack without altering it.

1. Push:- Performed to append an element to the top of stack, as the top is head pointer, the next address of the element points to the head and head is set as the pushed element.

2. Pop:- Popping an element from stack using a linked list is equivalent to deletion at start in a linked list while the next element, if present, is set as head or top pointer.

3. isEmpty:- If there is no node present, False is returned else True

4. IsFull:- If the size of stack exceeds the number of elements, then True is returned else False.

5. Top:- Also peek in stack, is the data contained in the head or top node of the linked list.

Note that, different programming languages have variations in syntax for these operations but the working remains the same, such as stacked stl operations in popular library are empty(),size(),top(),push() and pop() on the other hand, Python has no such library but user can self-define a class with working of stack. Thus push and pop in stack are universal alongside other operations.

There are different types of stack meaning that each one fares in a varied manner over other. The two mains types are:-

1. Register Stack
These types of stack are present in the memory unit of the CPU with them holding only a small amount of data. The size of the register stack is comparatively lesser.

2. Memory Stack
Memory Stack is a technique for managing memory that enables system memory to be utilised as a first-in, last-out buffer for temporary data storage. The register known as the Stack Pointer is one of the crucial components of stack memory operation.

Consider, we have an array with contiguous stack memory consisting of 5 elements, we perform the set of operations as mentioned below as trace step-by-step:-

We create a Stack named p and perform the stack trace operations on it.

In this manner, the stack effect in leaving us with a lone element, 20 and we performed push and pop in stack in this stack example.

Analysis of Operations of Stack

Of all the operations discussed in stack meaning there is a cost attached with each of the operation in stack that can be defined as:-

Push – O(1) – It takes constant time to insert an element at the top of the stack.

Pop – O(1) – It takes constant time to remove an element at the top of the stack.

isEmpty/isFull – O(1) – It takes constant time to check if the stack is empty or full.

Size – O(1) – The size can be stored in a unique variable indicating that it can be accessed in constant time.

As we have covered a portion of stack meaning and other important knowledge to take from this article on what is stack. There are some of the important use cases of stack and some of them are as follow:-

Undo/Redo
Performed with stack meaning while writing text in a document or similar operations, we use undo to get back to already done work or redo to restore back to changes.

Infix to Postfix
Infix expressions can be converted to postfix using a stack algorithm based approach.
While these are a few examples, stack effects in many applications in the field of computer science.

Web Browsers
We switch across web pages by navigating among each other, the internal working of the feature is based on stack data structure.

Conclusion
In this article, we started by studying stack meaning and the concepts and theory related to stack. Later we progressed with stack implementation and performed a stack trace using operations. Applications and analysis of stack were the other key takeaways from this article.

We hope you liked this article on stack meaning and related concepts and hope to see you again at PrepBytes with an informative article.

1. What stack operations in data structure are used to avoid underflow and overflow?
isEmpty and isFull tell us to push or pop in a stack and avoid such cases of error.

3. Define stack in data structure
Stack definition in Data Structure can be stated as a linear data structure that follows the principle of Last In First Out and can be represented using Array or Linked List with operations such as Push, Pop, isEmpty, isFull and Top.