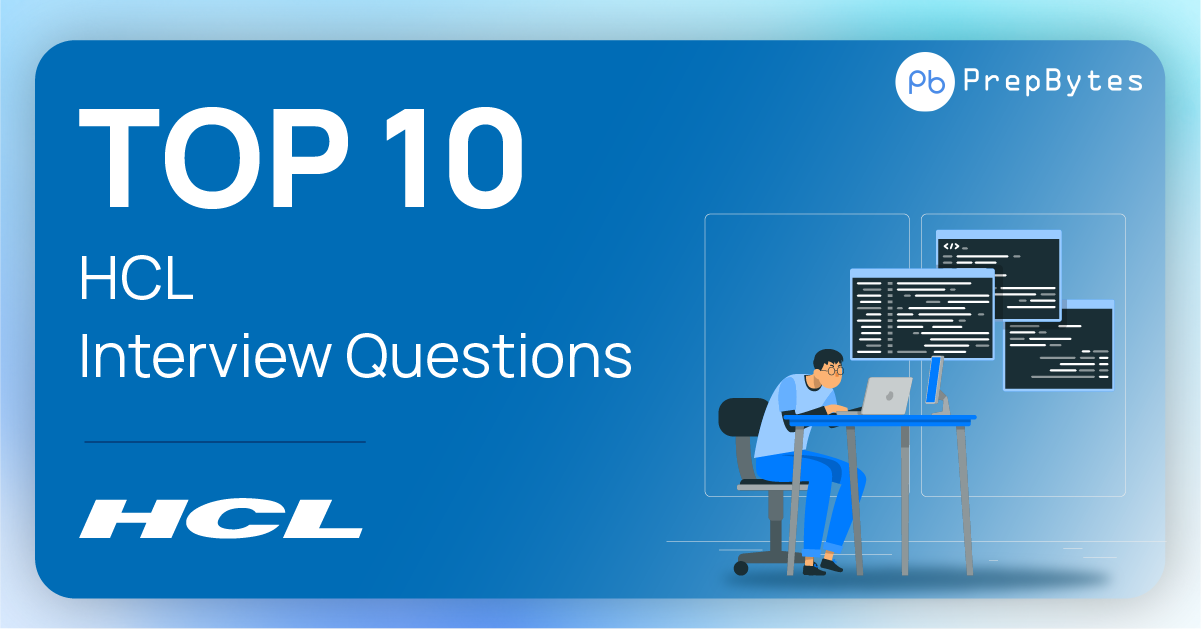 Want to work for HCL? Here we discuss some of the commonly asked interview questions.

What is the purpose of “register” keyword in C?

Register keyword declares register variables which have the same functionality as that of the auto variables.
The only difference is that the compiler tries to store these variables in the register of the microprocessor if a free register is available. This makes the use of register variables to be much faster than that of the variables stored in the memory during the runtime of the program. If a free register is not available, these are then stored in the memory only.
Usually few variables which are to be accessed very frequently in a program are declared with the register keyword which improves the running time of the program. An important and interesting point to be noted here is that we cannot obtain the address of a register variable using pointers.

To specify the storage class for a variable, the following syntax is to be followed:

What is Mesh topology?

Mesh topology: It is a point-to-point connection to other nodes or devices. All the network nodes are connected to each other. Mesh has n(n-1)/2 physical channels to link n devices.
There are two techniques to transmit data over the Mesh topology, they are:

What is critical section?

Each process must request permission to enter its critical section. The section of code implementing this request is the Entry section.

The critical section is followed by exit section.

The remaining code is remainder section.

The TCP/IP specifications described a lot of applications that were at the top of the protocol stack.
Two end to end protocols are:

What are constructors and destructors in C++?

Constructors: A class constructor is a special member function of a class that is executed whenever we create new objects of that class. A constructor will have exact same name as the class and it does not have any return type at all, not even void. Constructors can be very useful for setting initial values for certain member variables.
Constructor Example:

Destructor: Destructor is a member function which destructs or deletes an object when an object goes out of scope. Destructors have same name as the class preceded by a tilde (~).Destructors don’t take any argument and don’t return anything Destructor can be very useful for releasing resources before coming out of the program like closing files, releasing memories etc.
Example of destructor:

What are thread pools?

The general idea behind thread pools to create a number of threads at process startup and place them into a pool , where they sit and wait for work. Whenever a need occurs for a new thread for a task , a thread is awakened from this pool . Once the task assign to thread is completed it returns to pool and awaits more work. In case pool contains no available thread , the task waits until one becomes free.

Search an element in a sorted and rotated array

An element in a sorted array can be found in O(log n) time via binary search. But suppose we rotate an ascending order sorted array at some pivot unknown to you beforehand. So for instance, 1 2 3 4 5 might become 3 4 5 1 2.
Devise a way to find an element in the rotated array in O(log n) time. Input : arr[] = {5, 6, 7, 8, 9, 10, 1, 2, 3};
key = 3
Output : Found at index 8
The idea is to find the pivot point, divide the array in two sub-arrays and call binary search.
The main idea for finding pivot is – for a sorted (in increasing order) and pivoted array, pivot element is the only element for which next element to it is smaller than it.
Using above criteria and binary search methodology we can get pivot element in O(logn) time
Program to search an element in a sorted and pivoted array

Output:
Index of the element is : 8

What are the differences between throw and throws in Java?

Below is the example which shows how to use throws keyword.

There are four access modifiers in java that control visibility:

Write a C function to count number of nodes in a given singly linked list.

C Code to get count of number of nodes in a linked list: