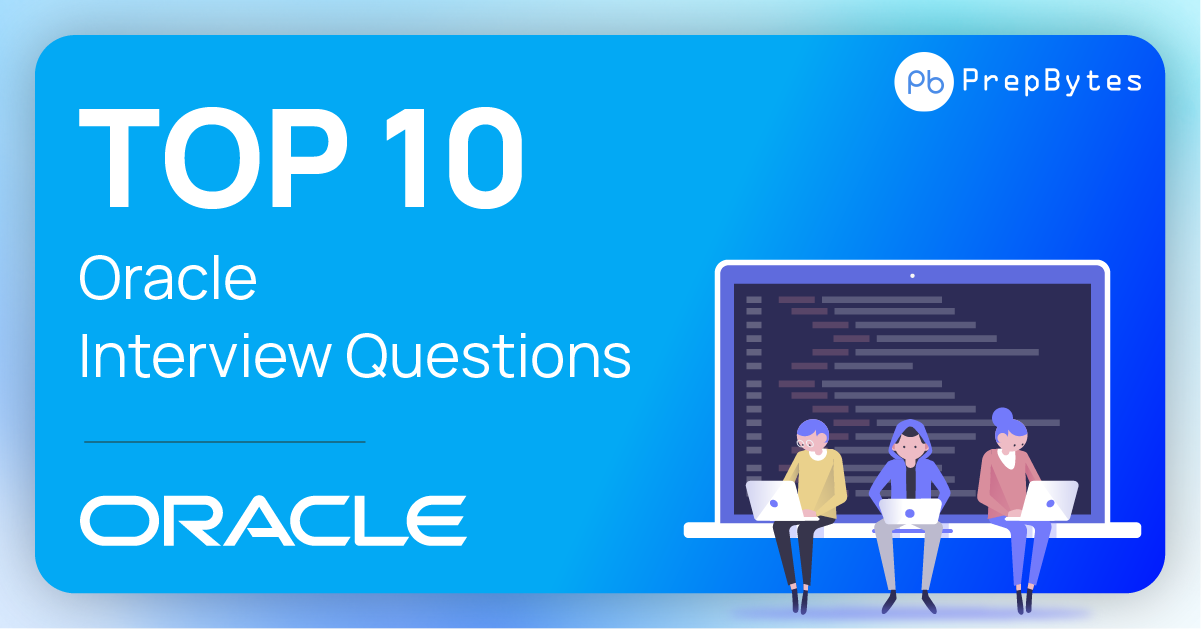 Want to work for Oracle? Here we discuss some of the commonly asked interview questions.

Explain differences between DDL and DML with examples

CREATE – is used to create the database or its objects (like table, index, function, views, store procedure and triggers).
ALTER-is used to alter the structure of the database.
TRUNCATE–is used to remove all records from a table, including all spaces allocated for the records are removed.
COMMENT –is used to add comments to the data dictionary.
RENAME –is used to rename an object existing in the database.

Write an efficient C program to find the sum of contiguous subarray within a one-dimensional array of numbers which has the largest sum.

C Program to find the contiguous subarray with largest sum

Given linked list, write a function to detect if there is a loop in it.

This is the fastest method. Traverse linked list using two pointers. Move one pointer by one and other pointer by two. If these pointers meet at some node then there is a loop. If pointers do not meet then linked list doesn’t have loop.

Write a code for reversing a string , example if input is “PrepBytes” output should be “setyBperp”

What are collections in Java?

Collections in java is a framework that provides an architecture to store and manipulate the group of objects.
All the operations that you perform on a data such as searching, sorting, insertion, manipulation, deletion etc. can be performed by Java Collections.
Java Collection framework provides many interfaces (Set, List, Queue, Deque etc.) and classes (ArrayList, Vector, LinkedList, PriorityQueue, HashSet, LinkedHashSet, TreeSet etc).

What is a Friend function?

To declare a function as a friend of a class, precede the function prototype in the class definition with keyword friend as follows:

Friendship is not mutual. If a class A is friend of B, then B doesn’t become friend of A automatically.

What is the difference between class and structure?

In terms of language, except one little detail, there is no difference between struct and class.
Contrary to what younger developers, or people coming from C believe at first, a struct can have constructors, methods (even virtual ones), public, private and protected members, use inheritance, be templated… just like a class.

What is convoy effect?

Convoy effect occurs in case of FCFS when all the other processes wait for one big process to get off the CPU.
This effect results in lower CPU and device utilization that might be possible if the shorter processes were allowed to go first.

What is Table Normalization in DBMS?

Normalization is a process of organizing the data in database to avoid data redundancy, insertion anomaly, update anomaly & deletion anomaly. Let’s discuss about anomalies first then we will discuss normal forms with examples.Anomalies in DBMS

There are three types of anomalies that occur when the database is not normalized. These are – Insertion, update and deletion anomaly. Let’s take an example to understand this.

Update anomaly: In the above table we have two rows for employee Krisha as he belongs to two departments of the company. If we want to update the address of Krisha then we have to update the same in two rows or the data will become inconsistent. If somehow, the correct address gets updated in one department but not in other then as per the database, Krishna would be having two different addresses, which is not correct and would lead to inconsistent data.

Insert anomaly: Suppose a new employee joins the company, who is under training and currently not assigned to any department then we would not be able to insert the data into the table if emp_dept field doesn’t allow nulls.

Delete anomaly: Suppose, if at a point of time the company closes the department D890 then deleting the rows that are having emp_dept as D890 would also delete the information of employee Maggie since she is assigned only to this department.

To overcome these anomalies we need to normalize the data

One example of Abstraction is creating interface to denote common behavior without specifying any details about how that behavior works e.g.

You create an interface called Vehicle which has the start() and stop() method.

This is called abstraction of Vehicle because every server should have a way to start and stop and details may differ.