We are provided with a 2D Matrix, and we need to construct a doubly linked list with 4 pointers, namely:

Each node should be connected to its adjacent nodes using these 4 pointers. 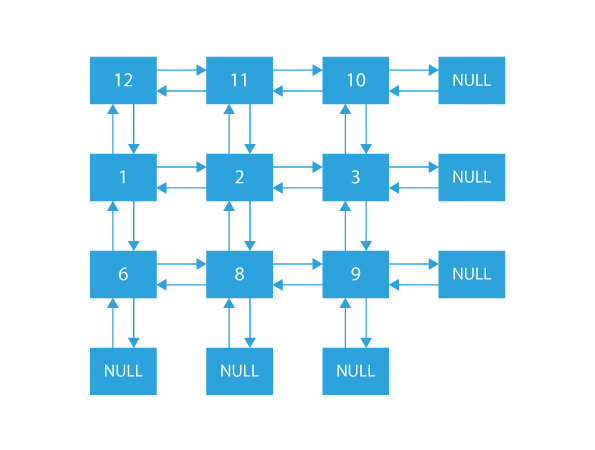 We are given a 2D Matrix with N rows and M columns. Every element at index i, j (i.e., matrix[i][j]) needs to be changed into a node, and it should be linked to all its adjacent cells using 4 pointers given to us.

The Structure of Node will be:

Let’s dive into the Approach and Algorithm now.

The Approach for the given problem statement is straightforward.

This blog has discussed the problem of constructing a 2d doubly linked list. Creating doubly linked list from 2D matrix will make your data structures strong which will always help in the interviews, you can follow this link Linked List.

A linked list is a dynamic data structure where each element (called a node) is made up of two items: the data and a reference (or pointer), which points to the next node.

In computer science, a doubly linked list is a linked data structure that consists of a set of sequentially linked records called nodes. Each node contains three fields: two link fields (references to the previous and to the next node in the sequence of nodes) and one data field.

A doubly linked list contains a pointer to the next node as well as the previous node. This ensures that the list can be traversed in both directions.