In this problem, we are given two sorted linked lists and are asked to print a single linked list that contains the common intersection from the two lists.

Let me make this more clear with an example test case:
Linked list 1:

The resultant Linked List after the intersection of the above lists 1 and 2 will be:

Let's first understand the problem statement with the help of an example:

Now, I think from the above examples, it is clear what we are trying to find in this problem. So next we will try to think how we can approach this problem.

Before jumping to the next section of the blog, try to think how you can approach this problem?

Suppose our initial linked lists are ‘a’ and ‘b’, the basic idea is to take two pointers, each pointing to the head of one of the two linked list 'a' and 'b'. Now start traversing the linked lists until one of them is completely traversed and while traversing check:

The dummy linked list which we are referring to above, it's main idea is to take the help of a dummy node variable that will store our final resultant list (dummy LinkedList). The pointer tail will point to the last node in the resultant list, so that the new nodes can be added easily to the resultant list. This dummy node is used as a temporary node.

When we have traversed either of the two given lists completely, then the result is in the dummy list. The values are allocated from the next node of the dummy, i.e. our resultant intersection list starts from the next of the dummy node (dummy.next).

Time Complexity: O(m+n), where m and n are the numbers of nodes in the first and second linked lists, respectively.

Space Complexity: O(min(m, n)), as the output list can store at most min(m, n) nodes.

Can we solve the above problem recursively, try to think?

I can think of another approach using recursion. It will work the same way, but with a recursive function that takes two nodes and returns the intersected node list.

The most efficient idea is to compare the first elements of both the lists:

Start comparing the first elements of the two linked lists: 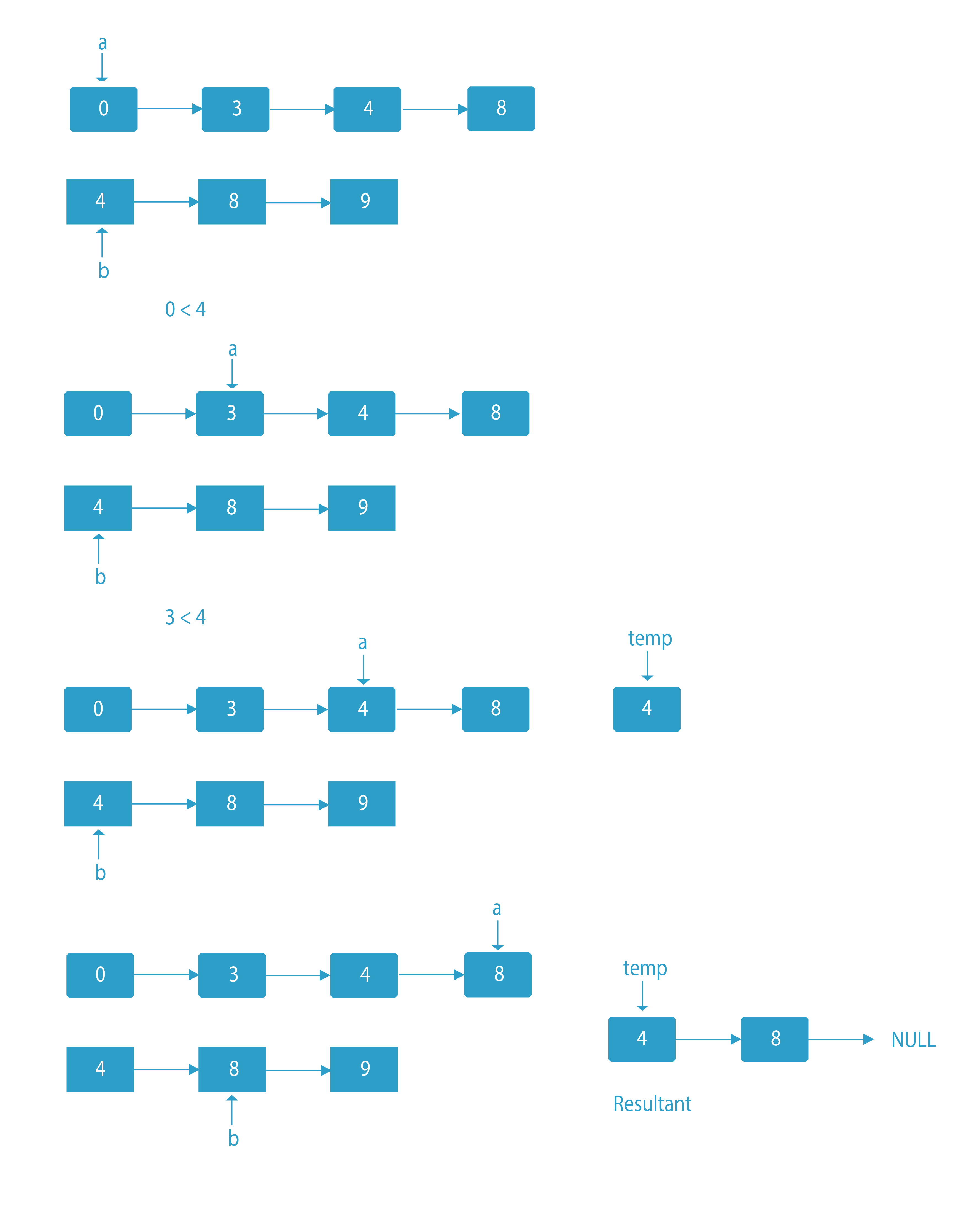 Time Complexity: O(m+n) where m and n are the numbers of nodes in the first linked list and second linked list respectively.

Space Complexity: O(max(m, n)), as the output list can store at most min(m,n) nodes .

This blog tried to discuss the problem when we are given two linked lists and we have to return the intersection list of the two. If you want to practice more questions on linked lists, feel free to solve them at Linked List.