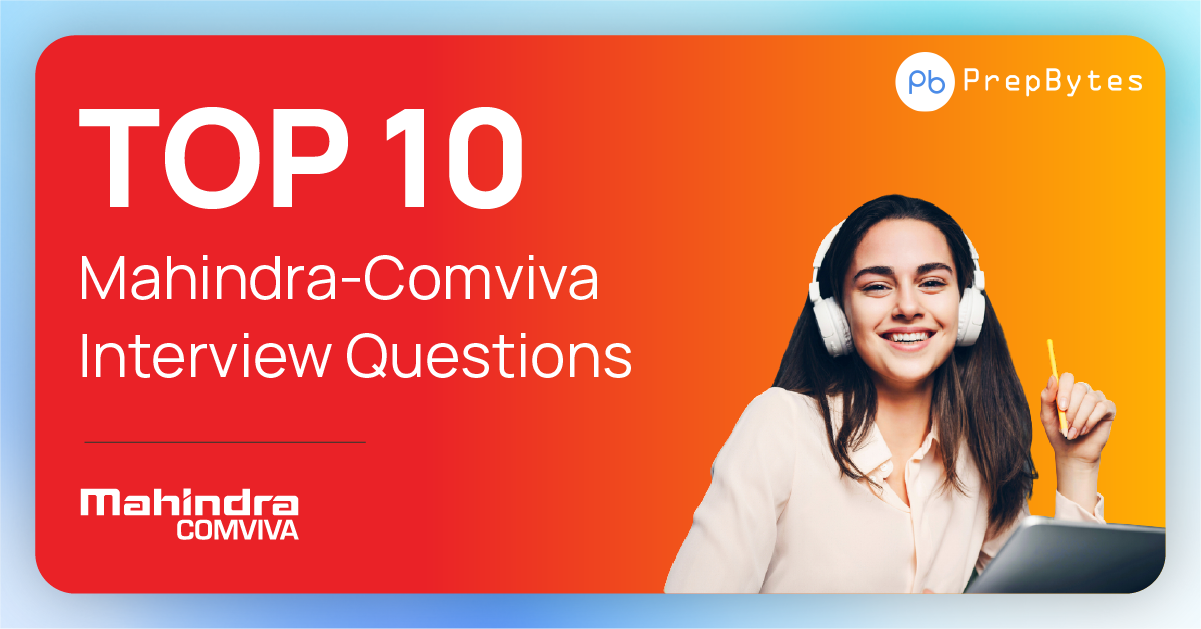 Want to work for Mahindra-Comviva? Here we discuss some of the commonly asked interview questions in Online Placement Preparation Program.

What is normalization of table in DBMS?

Normalization is a process of organizing the data in database to avoid data redundancy, insertion anomaly, update anomaly & deletion anomaly. Let’s discuss about anomalies first then we will discuss normal forms with examples.

There are three types of anomalies that occur when the database is not normalized. These are – Insertion, update and deletion anomaly. Let’s take an example to understand this.

Update anomaly: In the above table we have two rows for employee Krisha as he belongs to two departments of the company. If we want to update the address of Krisha then we have to update the same in two rows or the data will become inconsistent. If somehow, the correct address gets updated in one department but not in other then as per the database, Krishna would be having two different addresses, which is not correct and would lead to inconsistent data.

Insert anomaly: Suppose a new employee joins the company, who is under training and currently not assigned to any department then we would not be able to insert the data into the table if emp_dept field doesn’t allow nulls.

Delete anomaly: Suppose, if at a point of time the company closes the department D890 then deleting the rows that are having emp_dept as D890 would also delete the information of employee Maggie since she is assigned only to this department.

Explain OSI model and its layers

Write the code for calculating factorial of a number

C program to find factorial of given number using recursion

What is the use of ‘protected’ access modifier in Java

The protected modifier specifies that the member can only be accessed within its own package (as with package-private) and, in addition, by a subclass of its class in another package.
Protected is member level access modifier.It cannot be applied to classes and interface

What is deadlock in operating System?

In a multiprogramming environment, several processes may compete for a finite number of resources. A process requests resources, if the resources are not available at that time, the process enters a waiting state.

Sometimes a waiting process is never again able to change state, because the resources it has requested are held by other waiting processes. This situation is called deadlock

What are joins in SQL?

Here are the different types of the JOINs in SQL:

What is Inheritance in Java. Does Java support multiple Inheritances ?

For example “Delivery Order” class inherits from an “Order” class. The specialized “Delivery Order” has specialized method for delivering the order and computing shipping charges , but its other methods such as adding items and billing are inherited from Order class. In general , if class A extends B, class A inherits methods from class B but has more capabilities than class B.

No Java does not support Multiple Inheritance

What are inline functions in C++?

To inline a function, place the keyword inline before the function name and define the function before any calls are made to the function.The compiler can ignore the inline qualifier in below mentioned cases:

Syntax for defining the function inline is:

All the functions defined inside the class are implicitly inline.

What is virtual function in C++?

C++ virtual function is a member function in base class that you redefine in a derived class. It is declared using the virtual keyword. It is used to tell the compiler to perform dynamic linkage or late binding on the function.
In late binding function call is resolved during runtime. Therefore compiler determines the type of object at runtime, and then binds the function call. Virtual functions are mainly used to achieve Runtime polymorphism
Example of Virtual Function:

What are the differences between TCP and UDP

TCP(Transmission Control Protocol): It is a reliable connection-oriented protocol which handles byte-stream from source to destination without error and flow control.

UDP(User-Datagram Protocol): It is an unreliable connection-less protocol that do not want TCPs, sequencing and flow control. Eg: One-shot request-reply kind of service.