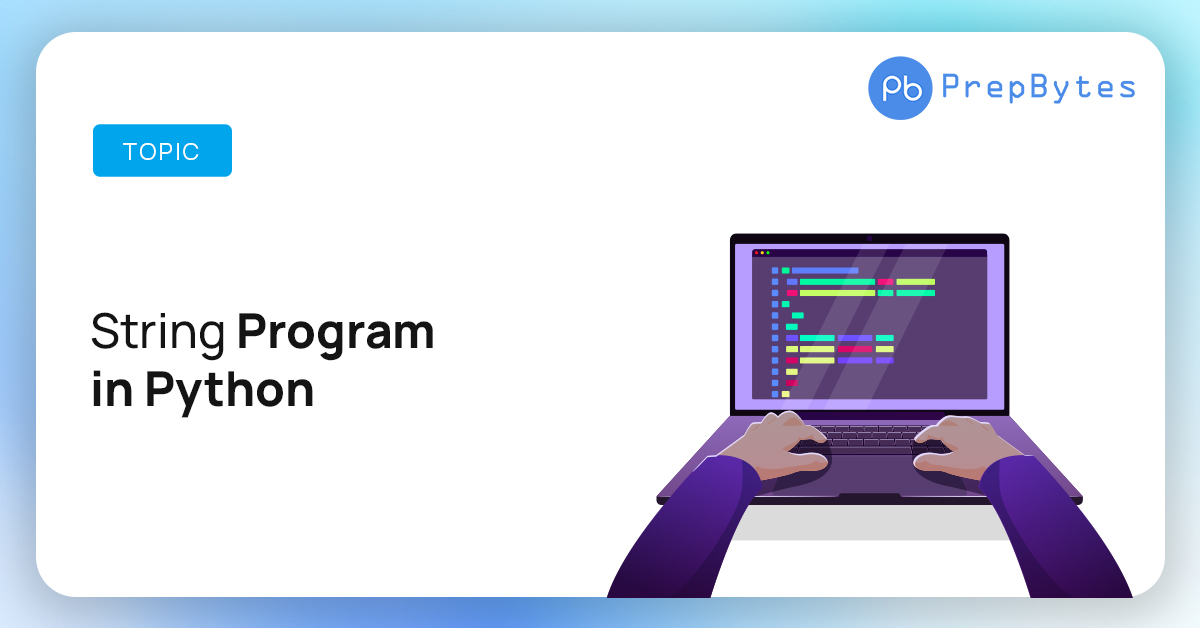 In this article, we will discuss strings in python in detail. A string in computer programming is a group of characters. For instance, the word "hello" is made up of the letters "h," "e," "l," "l," and "o." A string in Python is denoted by single or double quotations. For example,

Here, a string variable named string1 has been created. Python Programming is used as the variable’s initial value.

Example of String Program in Python

The name and message variables in the example above contain the values "Python" and "I love Python" respectively.

Although we can also use single quotes, we have used double quotes here to represent strings.

There are three ways we can get to the characters in a string.

Indexing: One way is to treat strings as a list and use index values. For example,
greet = ‘hello’

Slicing: Access a range of characters in a string by using the slicing operator colon :. For example,
g = ‘Hello’

Note: We will get issues if we try to access an index that is outside of the allowed range or if we use non-integer integers.

In Python, strings are immutable. That means a string’s characters cannot be modified. For example,

However, we can assign the variable name to a new string. For example,

A multiline string can also be created in Python. Triple double quotes """ or triple single quotes ”’ are used for this. For example,

In the above example, anything inside the enclosing triple-quotes is one multiline string.

Strings are one of the most often used data types in Python because they can be used for a wide variety of operations.

For a string comparison, we employ the == operator. The operator returns True when two strings are equal. Otherwise, it returns False. For example,

In the above example,

Using the + operator in Python, we can combine (concatenate) two or more strings.

In the example above, the + operator was used to combine the strings greet and name.

Iterate Through a Python String

A for loop can be used to iterate through a string. For example,

To determine a string’s length in Python, use the len() function. For example,

Using the keyword in, we may determine whether a substring is present within a string or not.

There are other string methods in Python besides those already given. Here are some of those methods:

Some characters in a string can be escaped using the escape sequence.

Let’s say we need to include both single and double quotes in a string,

The compiler will treat "He said, " which contains single or double quotes, as a string. As a result, the code above will result in an error.

To solve this issue, we use the escape character \ in Python.

The full list of Python-supported escape sequences is provided below.

Printing values and variables is really simple when using Python f-Strings. For example,

This brand-new formatting syntax is flexible and effective. We will now print strings and variables using f-Strings.

Conclusion
So, with the help of this article, you will have a better understanding of string programs in python. Practice more and more for making good grasp on strings in python.