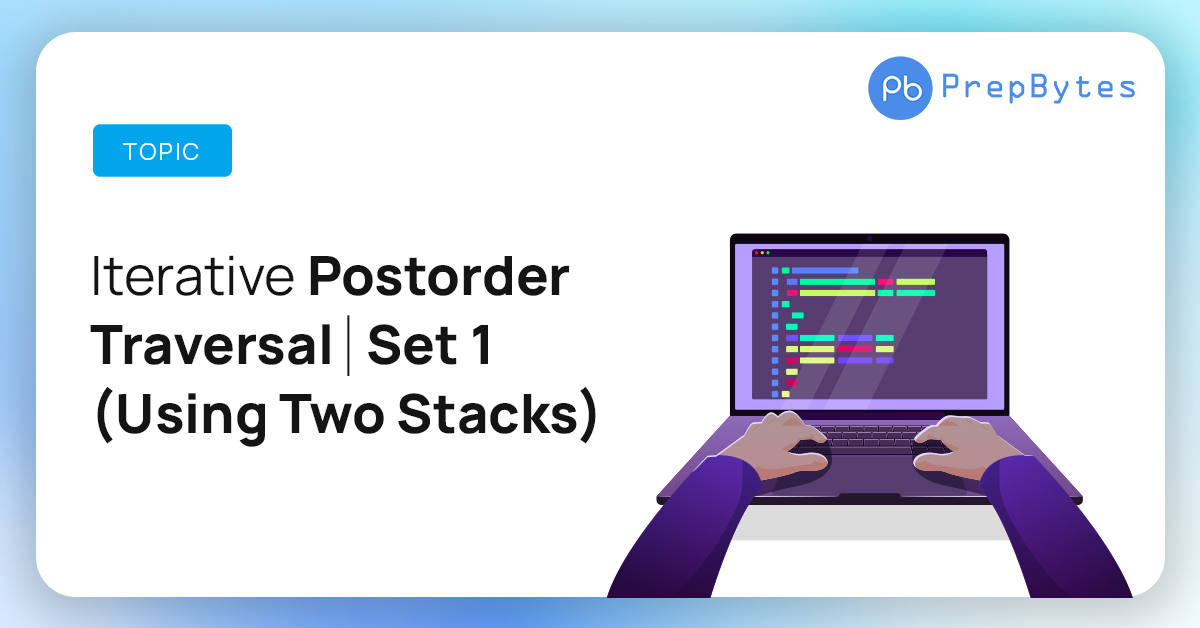 You are given a binary tree. Your task is to print the postorder traversal of the tree iteratively, using 2 stacks.

So, let us now discuss the approach.

What is Postorder Traversal?

Before we directly jump into the solution, let us first discuss in detail, what postorder traversal is. Consider the tree given below.

We are currently at the root node of the tree. There are three different types of traversals. The preorder traversal says that we have to follow the order “root left right”. This means that as soon as we are at a node, we have to mark it visited.

The inorder traversal has the order of “left root right”. This means that first we explore the left subtree, then mark the current node as visited, and then visit the right subtree. This is shown below.

So, for better understanding, have a look at the image shown below.

Now that we have a complete understanding of different tree traversals, let us approach our problem i.e. postorder traversal using 2 stacks.

So, what is the reverse of postorder? It is “root right left”. This is very similar to the preorder traversal. Only we have to visit the right child first, before visiting the left child.

So, let us consider two stacks and the tree as shown below. 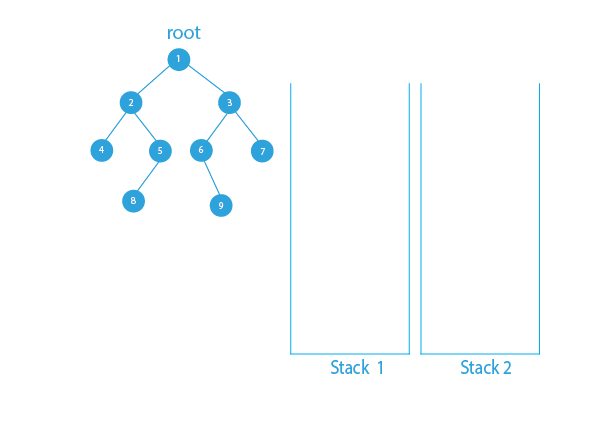 The initial step is to push the root of the tree into Stack 1. Now, we will follow the following algorithm.

So, according to the above algorithm, since Stack 1 is not empty, we pop it and push the element into Stack 2. 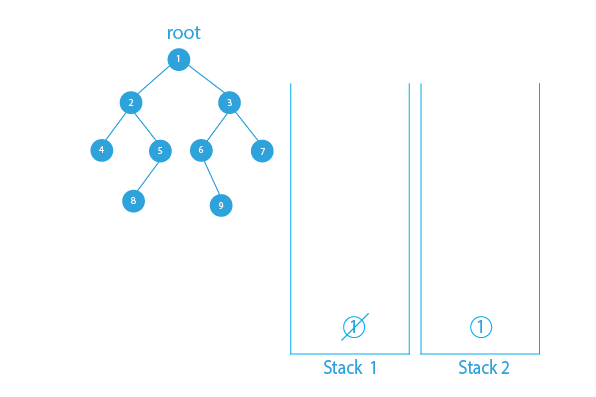 Now, the current node i.e. Node 1 has both left and right children. So, push the left child into Stack 1 first and then push the right child too. 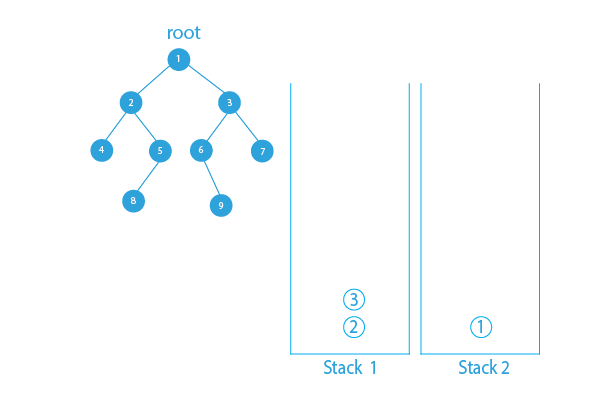 Now, we pop Node 3 from Stack 1 and push it into Stack 2. We also add the left and right children of Node 3 to Stack 1. 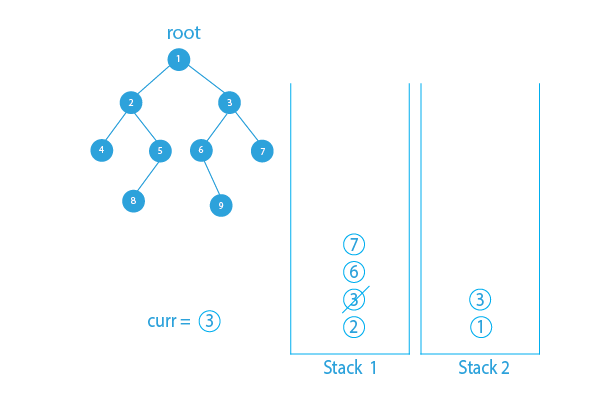 Since Node 7 does not have any children, it just gets popped from Stack 1 and gets added to Stack 2. 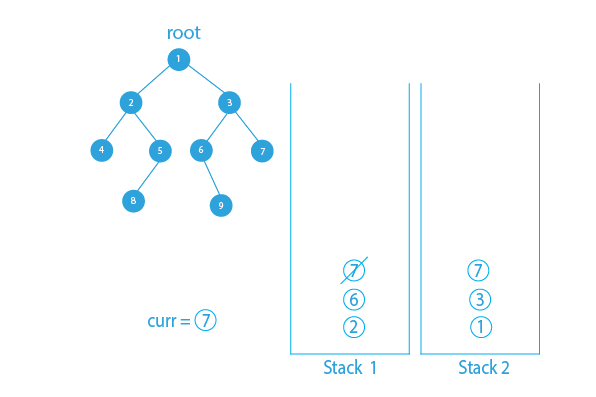 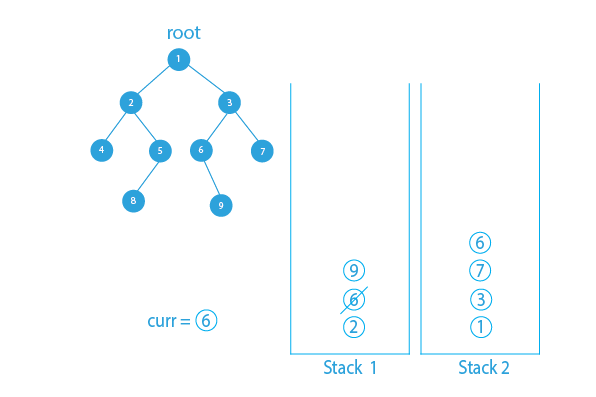 Now, Node 9 gets popped from Stack 1 and gets pushed into Stack 2. 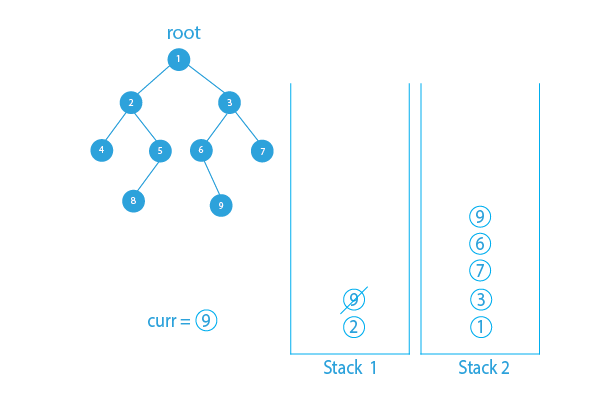 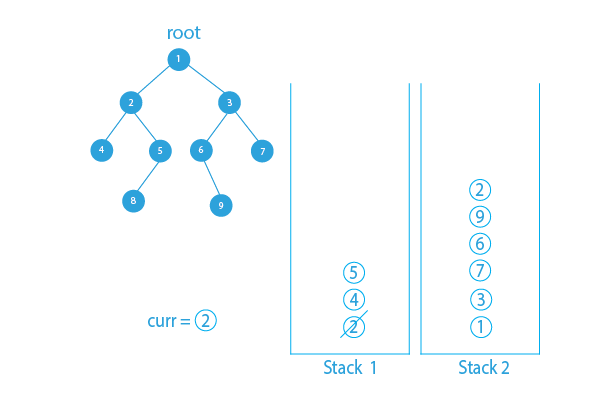 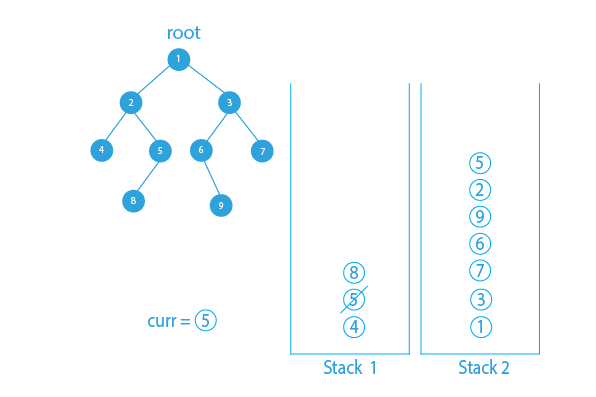 Now, Node 8 and Node 4 will be popped one by one from Stack 1 and pushed into Stack 2. Since they don’t have any children, Stack 1 will become empty. 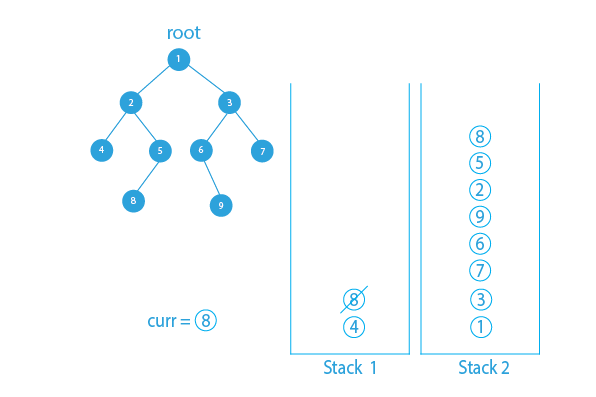 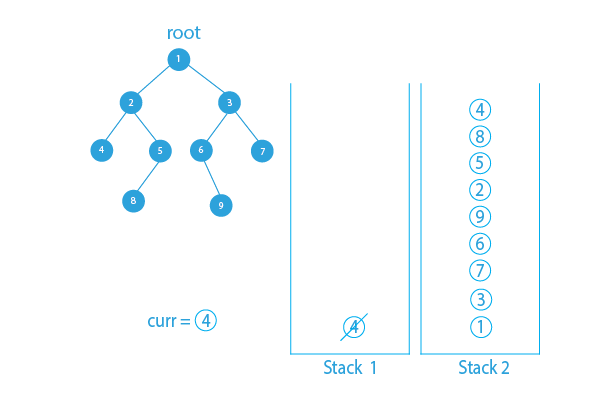 So, now that Stack 1 is empty, we just have to pop all the elements from Stack 2 and as soon as an element is popped from Stack 2, we print it. Thus, we will get the postorder traversal. 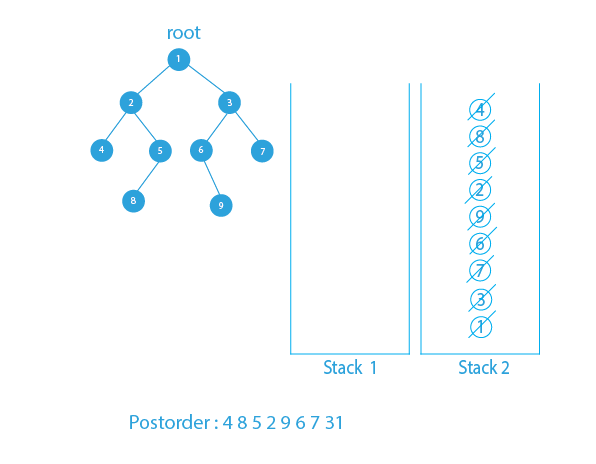 Hence, we have completed the procedure.

Why did this work?

This is nothing but the postorder traversal.

The time complexity of this procedure is O(N) where N is the number of nodes in the tree. This is because we have to traverse all the nodes of the tree once in order to print them.

The space complexity of this approach is O(N). This is because we are using 2 stacks and Stack 2 at the end contains all the N nodes of the tree.

This article tried to discuss Iterative Postorder Traversal. Hope this blog helps you understand and solve the problem. To practice more problems you can check out MYCODE | Competitive Programming at Prepbytes.