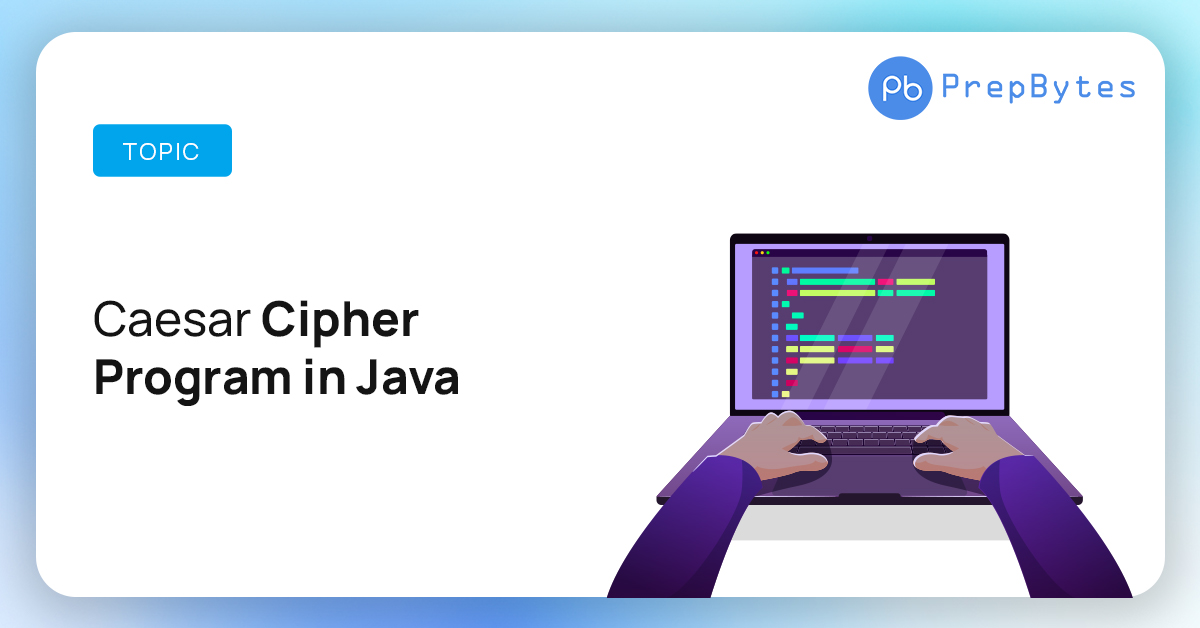 In the article, we are going to study about caesar program in java where first we will be starting things with what exactly caesar cipher is and upon progressing with theory and concept related to the the topic, we will study dry run, logic, algorithm, code for caesar cipher program in java. Moreover, the analysis of code will be done to get an in-depth knowledge and concept relative to the topic.

What is Caesar Cipher

As off-topic it might sound first, Caesar Cipher is an interesting problem that dates back to the time of Julius Caesar, when information was passed by altering the original message in the similar manner to what modern day encryption-decryption phenomena is practiced.

Encryption is performed by on obtaining the shift input, n and shifting each character in string by n places such that if character B needs to to be shifted by 3 places, then B->C->D->E can define the transition well.

The reverse translation to its original state i.e. B can be termed as Decryption of character. This process of substitution is applied on each character of the word in order to call it as Caesar Cipher.

The following two formulae tells us that we can sum up the shift value and modulo to find value that exceed the unit value of highest alphabet, z i.e. 26.

Now that we have a brighter picture on the question of caesar cipher logic actually works. Let us trace an example in a step by step manner to see how it works.

We have our input word, ATLAS and our job is to first encrypt and decrypt it again to its original form, we can do it in as per the step by step process illustrated and explained below.

In the above illustration, A was moved by three places and placed as D in the result string.

The alteration made of T with change of +3 in 1st index will lead to storage of V in the string.

At index 2, L was replaced with O, that is stored in the 2nd index of result string.

Similar to the operation at the 0th index, here also, A is going to turn into D when shifted by 3 positions. Thus D is going to be stored in the resultant string.

The final operation on the last index to replace S in a similar fashion, leads to V getting stored in the result string.

In the previous section, we discussed how to substitute character values using the shifting integer on all the characters stored in string. Now let us have a look at what can be a clean algorithm to solidify the knowledge of the Caesar cipher program in java.

Having a clear understanding of how each step unfolds by going through the dry run and algorithm portion in this caesar cipher program in Java, let us move to the code part finally.

Explanation: In the driver code, plain text string and shift integer are taken from the user and passed to the encrypt function where the result is declared using StringBuffer() to hold the result.

The condition is applied on each character of the plaintext with shifting performed inside the loop in the program. In the end, we return the result back to the main function to print the result.

Coming to the analysis of code for the Caesar cipher program in java, it is evident from the logic that we will traverse each character in order to alter the value for encryption, thus the code is going to have a linear complexity in the worst case. Hence, the time complexity is denoted by O(N).

Conclusion
In this article, we studied that Caesar cipher is used for encryption and decryption on texts and named after its use in Julius Caesar era as a token of confidentiality.