In this question, we are given a sorted Singly Linked List. We have to remove all the occurrences of duplicate nodes in the list.

Let’s try to understand the problem statement with examples.

Now, we have to remove all the occurrences of duplicates from this list. As we can see, 39 is the only repeating value (which have more than 1 occurrences in the linked list), so we will delete all the nodes which have the value 39.

This question is not a very complex one. We have to make use of list traversal in the question. Let us have a glance at the approach.

Before moving to the approach, just try to think how you can solve this problem?

As long as we will keep finding duplicates, we will keep traversing through the list. As soon as the duplicates end, we will make the previous pointer point to the next of the last duplicate node of that block. Let us have a look at the algorithm. 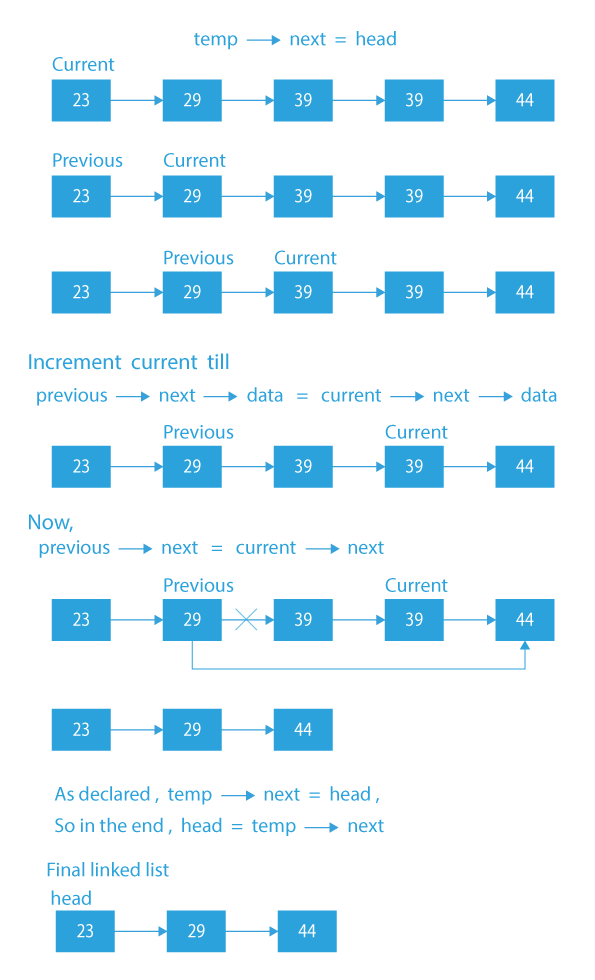 
Space Complexity: O(1), as only temporary variables are being created.

So, in this article, we have tried to explain the most efficient approach to delete all occurrences of duplicates from a sorted linked list. It looks like a nested traversal, but it is not. This is an important question when it comes to coding interviews. If you want to solve more questions on Linked List, which are curated by our expert mentors at PrepBytes, you can follow this link Linked List.